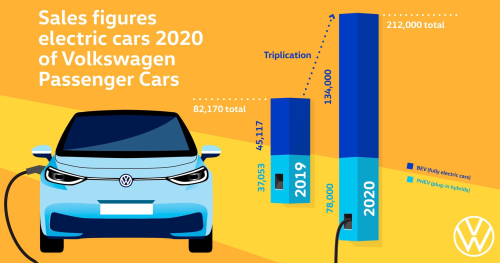 We really hit the bullseye with the ID.3. Even though it was only introduced in the second half of the year, it ranked in the top of the sales charts in many countries almost right away.

—Klaus Zellmer, the board member responsible for Sales of Volkswagen Passenger Cars

The ID.3 was the most frequently delivered BEV in Finland, Slovenia and Norway in December. In Sweden, the ID.3 was the top-selling car in December 2020 in absolute numbers—regardless of the type of drive. In the Netherlands and Germany, Volkswagen Passenger Cars managed to leap to the number one spot in all-electric vehicles over the full-year 2020 with a share of 23.8% in Germany in the BEV market and 23% in the Netherlands.

Following closely on the heels of the ID.3, Volkswagen’s second all-electric model, the ID.4 is being successively launched. It is the brand’s first all-electric world car and as an SUV is also in line with customer trends; the share of SUVs of Volkswagen’s total deliveries worldwide rose from 29.8% in 2019 to 34.8% in 2020.

Overall, Volkswagen delivered around 5.328 million vehicles across all drive systems to customers around the world in 2020—a decline of around 15% compared to the previous year. In the month of December, the brand continued its final sprint toward the end of the year and was only slightly below the very good monthly figures of the previous year with minus two percent.