Since its founding in 2018 with the vision and strategy to commercialize methanol fuel cell technology, Blue World Technologies has built its fuel cell platform using the MEA technology of Danish Power Systems. 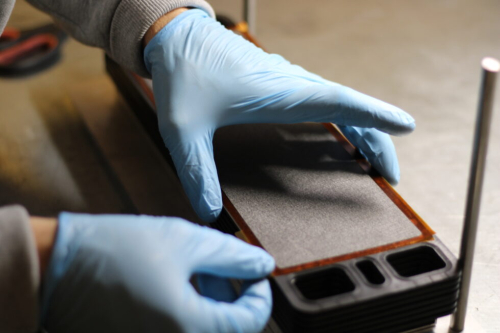 With the strong experience and competences of Danish Power Systems’ team, Blue World Technologies believes it will be able to accelerate product development to optimize the technology platform bridging R&D activities and market needs. With an industrial approach, Blue World Technologies is differentiated from most other manufacturers of methanol fuel cells and fuel cell systems by having all technologies and core component manufacturing within the fuel cell stack value-chain in-house, and in some cases even to system level.

The Power-to-X value chain. In the green transition, Power-to-X technologies are going to play a significant role, especially within the sectors where direct electrification is not possible or feasible, which, for example, could be within heavy-duty transportation.

When transforming green electricity into liquid fuel, such as methanol, it is possible to reuse the existing global infrastructure for storage and distribution while reducing fossil fuel consumption, and thereby, cutting down CO2 emissions. Methanol and other e-fuels can be used to fuel conventional combustion engines and generators, either as a stand-alone fuel or as an additive, or they can be used to power fuel cells.

On the utility side of the Power-to-X value chain, Blue World Technologies’ fuel cell technology is also striving to play an important role. With electrical efficiency of up to 45%, Blue World Technologies’ methanol fuel cells will for many applications provide a much higher efficiency compared to combustion engines and generators. In addition, the fuel cells provide a clean and environmentally friendly operation where emissions of harmful particles such as NOx and SOx are eliminated.

Furthermore, the operation can be either CO2 neutral or have a significantly reduced CO2 emission depending on the origin of the fuel, contributing to the combat against severe air pollution and climate changes.

NOx and SOx are eliminated...yes!