Power management company Eaton has introduced a complete suite of solutions from its Vehicle Group to reduce vapor emissions produced during the refueling of gasoline-powered vehicles.

Industry data reveals that significant amounts of hydrocarbons are commonly forced out through the filler neck and released into the atmosphere while a gasoline-powered vehicle is being refueled. This leakage occurs in all gasoline-powered vehicles, including passenger cars and an increasing number of small- and mid-sized commercial vehicles. This problem is even more pronounced in hybrid-electric vehicles, which require special measures to address evaporative emissions as the gas engine only operates intermittently, creating the need to store pressurized fuel vapor.

If fuel vapor is released into the atmosphere, it contributes to a category of pollutants known as evaporative emissions. This category of emissions is the largest source of volatile organic compounds (VOCs) produced by automobiles, which are a main source of haze, ozone, and particulate matter. Reducing these kinds of emissions from all gasoline-powered vehicles can be accomplished with a number of different solutions.

Eaton’s ORVR system traps tank vapors displaced during refueling and holds them in an onboard charcoal canister, preventing them from entering the atmosphere. The system, depending on configuration, contains multiple engineered and specialized valves, including a Grade Vent Valve, Rollover Valve, Fill Limit Vent Valve, and Inlet Check Valve. A Fuel Tank Isolation Valve is offered for use in hybrid electric vehicles. 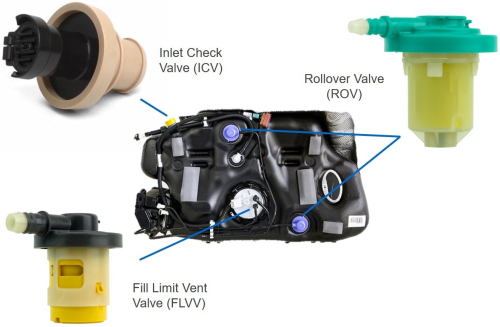 eVaptive’s software ensures optimum fuel vapor management in all driving, stationary and refueling modes, and its hardware is a one-size-fits-all unit that can be programmed to fit any vehicle platform. This flexibility reduces complexity and cost by allowing customers to use one set of hardware across all vehicle lines and fuel tank variants, which can shorten validation cycles and development time and allow OEMs to design a system with fewer vent points.

The LEV III regulations include increasingly stringent emission standards for pollutants for new passenger vehicles to be phased in through the 2025 model year. The rest of the US is currently adopting LEV III standards or harmonized on Tier 3 EPA standards. China and Brazil have already adopted similar evaporative emission regulations. The European Union is evaluating comparable evaporative emission regulations and is expected to follow suit in coming years.