The US Forest Service has published the Final Environmental Impact Statement (FEIS) for Rio Tinto’s and BHP’s Resolution Copper mine project in Arizona (earlier post). The publication comes after more than seven years of public and 11 years of tribal consultation. This reflects a delay from the July 2020 target date set under the Obama Administration. 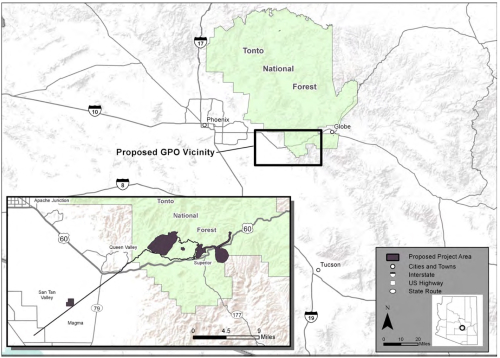 Decisions on whether to invest fully in developing the project, a proposed underground mine located in Arizona and one of the world’s most significant undeveloped copper deposits, remain subject to further permitting processes and a feasibility study that will be conducted over several years.

Ore production from the operations will be approximately 132,000 tons (120,000 tonnes) per day after extensive construction and ramp-up periods. The mine is estimated to produce as much as 40 billion pounds of copper over 40 years.

Resolution Copper says it is committed to continuing its engagement with Native American Tribes and working to seek consent before any decision on the development of the project, consistent with the International Council on Mining and Metals (ICMM) Statement on Indigenous Peoples and Mining.

Resolution Copper started the permitting process in 2013, with the US Forest Service leading a comprehensive, independent review under the National Environmental Policy Act (NEPA), over seven years, and multiple Administrations.

The Final EIS is now subject to 45 days of further public review and comment before the US Forest Service issues a final record of decision. After the US Forest Service process, further permitting will be progressed with other authorities and a detailed feasibility study completed over several years to inform investment considerations on the project. When an investment decision is made, Resolution Copper is expected to take around 10 years building infrastructure to prepare for the commencement of mining.

Resolution Copper Mining is a limited liability company owned 55% by Rio Tinto and 45% by BHP. Funding is proportional between the project partners. The project partners have spent more than $2 billion (Rio Tinto share $1.1 billion) to date to develop and permit the Resolution Copper project, including reclamation of the historic Magma Copper Mine site, sinking a second shaft to mining depth, rehabilitating an existing shaft, extensive drilling and ore body testing, and the permitting and public engagement process.

The publication of the Final EIS triggers a land exchange approved by Congress under the Obama Administration in 2015 that will see Resolution transfer 5,459 acres of high value conservation lands around Arizona to the Federal Government, in return taking ownership of 2,422 acres.