BNEF: global investment in energy transition hit $500B in 2020; $139B on EVs and infrastructure

A new, broad measure of “energy transition investment”, compiled by BloombergNEF (BNEF), shows that the world committed a record $501.3 billion to decarbonization in 2020, beating the previous year by 9% despite the economic disruption caused by the Covid-19 pandemic. 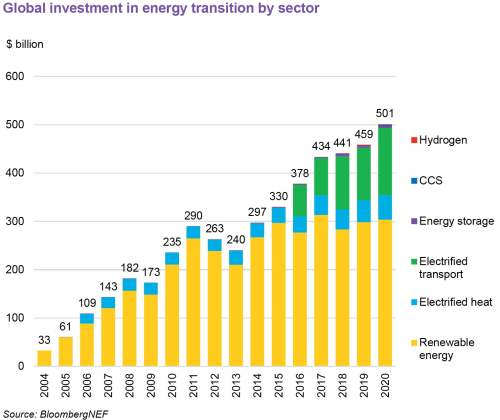 BNEF’s analysis shows that companies, governments and households invested $303.5 billion in new renewable energy capacity in 2020, up 2% on the year, helped by the biggest-ever build-out of solar projects and a $50-billion surge for offshore wind. They also spent $139 billion on electric vehicles and associated charging infrastructure, up 28% and a new record.

Other areas of energy transition investment also showed strength. Domestic installation of energy-efficient heat pumps came to $50.8 billion, up 12%, while investment in stationary energy storage technologies such as batteries was $3.6 billion, level with 2019 despite falling unit prices. Global investment in carbon capture and storage (CCS) tripled to $3 billion, and that in hydrogen was $1.5 billion, down 20% but the second-highest annual number to date.

Our figures show that the world has reached half a trillion dollars a year in its investment to decarbonize the energy system. Clean power generation and electric transport are seeing heavy inflows, but need to see further increases in spending as costs fall. Technologies such as electric heat, CCS and hydrogen are only attracting a fraction of the investment they will need in the 2020s to help bring emissions under control. We need to be talking about trillions per year if we are to meet climate goals.

A geographical split of BNEF’s energy transition investment data shows that Europe accounted for the biggest slice of global investment, at $166.2 billion (up 67%), with China at $134.8 billion (down 12%) and the US at $85.3 billion (down 11%). Europe’s performance was driven by a record year for electric vehicle sales, and the best year in renewable energy investment since 2012.

Electric bus (e-bus) sales are the second-largest category, although annual investment in the segment has decreased from $21 billion in 2016 to $11 billion in 2020. The decline has been driven by changing market dynamics in China, which accounted for 99% of global e-bus sales from 2016 to 2020. 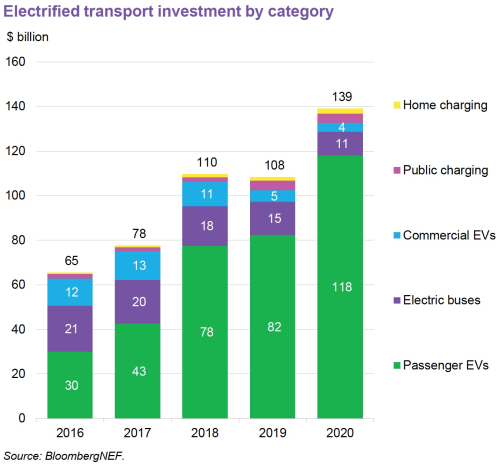 China’s e-bus prices have declined, while annual sales have slowed due to the decrease in purchase subsidies as well as market saturation in large cities.

Commercial EV investment declined from $12 billion in 2016 to $4 billion in 2020. This has been due to two factors: the decline in upfront costs of the vehicles—driven by falling battery prices—and changes in predominant duty cycles of vehicles sold in developed economies (Europe, US). The market is shifting from long-haul heavy-duty commercial vehicles towards cheaper medium- and light-duty commercial vehicles for regional and local deliveries of consumer goods.

Investment in public charging hit $4.1 billion in 2020, while home charging brought in $2.1 billion. Annual investments vary as government spending increases and drops when networks are completed. Charging infrastructure investment is equivalent to a small fraction of what is spent on new vehicles. 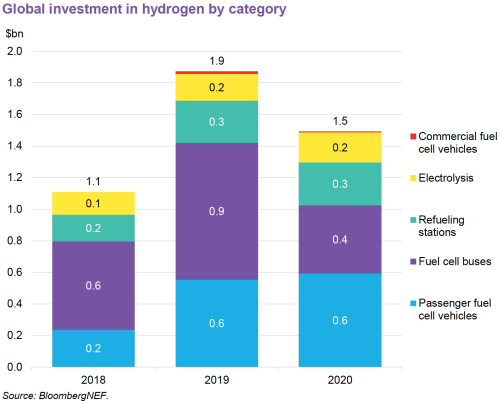 Investment in hydrogen-fueled vehicles was only a 130th of that in electric vehicles in 2020, underscoring the gap between the two technologies.

Hydrogen investment is expected to grow in the coming years, driven by increasing policy support.

Renewable energy investment. Global investment in renewable energy capacity moved up 2% to $303.5 billion in 2020. This was the second-highest annual figure ever (after 2017’s $313.3 billion), and the seventh consecutive total of more than $250 billion. Falling capital costs enabled record volumes of both solar (132GW) and wind (73GW) to be installed on the basis of the modest increase in dollar investment.

Highlights of the renewables investment total included a leap of 56% in financings of offshore wind projects to $50 billion, including the largest deal ever in that sub-sector—$8.3 billion for the 2.5GW Dogger Bank project in the UK North Sea. The year also saw the largest single solar park ever funded, the 2GW Al Dhafrah in the United Arab Emirates, at a cost of $1.1 billion.

Public markets and VC/PE. BloombergNEF also continues to track investment by the public markets and venture capital and private equity players in renewable energy and the closely related area of energy storage. In 2020, specialist companies in these areas raised a runaway record figure of $20 billion via share issues on public markets, up 249% on the previous year.

Venture capital and private equity investment in renewables and storage increased 51% to $5.9 billion last year. Both this, and investment via the public markets, took place against the backdrop of buoyant share prices: the WilderHill New Energy Global Innovation Index, or NEX, which tracks about 100 clean energy stocks worldwide, rose 142% in 2020 to record levels.

This positive investor mood helped electric vehicle companies raised some $28 billion from stock market investors in 2020, up from just $1.6 billion in 2019, according to BNEF estimates. Last year’s total was seven times the previous record, in 2016.