Home About Contact RSS GCC Twitter Newsletter
Lightning eMotors adds production capacity, space to meet growing demand from fleets for EVs
J.D. Power: Majority of EV owners are intent on purchasing another one in the future

While the lithium-ion battery is dominant in battery-electric vehicles, NiMH batteries are still the most common in full hybrid vehicles (HEVs), according to a new report—“Full Hybrid Electric Vehicle Markets 2021-2041”—from IDTechEx.

Toyota is the ruling OEM in the global HEV car market, with more than 60% market share in 2019. Other manufacturers have started to eat into this share over the years, but Toyota still reigns supreme. While the other OEMs have mostly transitioned towards Li-ion batteries for their HEVs, Toyota remains committed to NiMH batteries and HEVs for the foreseeable future, with the majority of their line-up now using either NiMH or Li-ion depending on the specifications.

For the relatively small batteries that are used in HEVs, the NiMH is still sufficient to meet requirements. It is also much more technologically mature and lower cost than Li-ion.

However, as Li-ion costs continue to fall and HEV battery capacity increases, NiMH batteries are unlikely to remain competitive, but will still see an increase in short term demand, IDTechEx says. 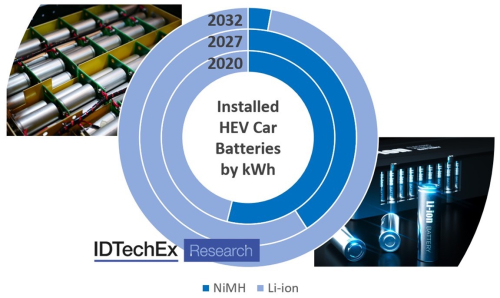 Sales of HEVs have continued to grow throughout the COVID-19 pandemic despite the downturn of the overall car market. This, combined with Toyota’s dominance and NiMH portfolio, provides a good market for NiMH batteries, at least in the short term. Li-ion technology is still evolving and reducing in price; at a certain point, it may no longer be cost-effective to continue using NiMH.

Additionally, fossil fuel bans are incoming, with countries such as the UK banning purely internal combustion engine (ICE) vehicles by 2030 and only allowing hybrids “that can drive a significant distance with zero emissions”.

HEV manufacturers will likely increase the battery capacity in order to give more electric-only range, making the Li-ion option more appealing. Even with this stay of execution for HEVs, banning vehicles with ICEs of any sort is likely to follow shortly after. This will eliminate the HEV in many markets and hence the demand for NiMH, IDTechEx notes.

The report gives an in-depth look at the historic HEV market in China, Europe, Japan, South Korea, and the US, with an outlook over the next 20 years. An extensive model database of more than 80 HEVs sold between 2015 and 2019 is used to determine the market’s battery and motor-generator technology in addition to geographical markets and manufacturer market shares.