US designates Graphite One Project as “High-Priority Infrastructure Project”

Canada-based Graphite One Inc. announced that it received notice on 15 January 2021 that its Alaska-based Graphite Creek Project has been designated a High-Priority Infrastructure Project (HPIP) by the US Government’s Federal Permitting Improvement Steering Committee (FPISC). The approval is the culmination of a process that began with the nomination on 4 October 2019 by Alaska Governor Mike Dunleavy of Graphite One’s project for High-Priority Infrastructure Project designation.

With this FPISC determination, Graphite One can elect to list on the Federal Permitting Dashboard should the Company choose to do so. The Federal Permitting Dashboard ensures that federal permitting agencies coordinate their project review authorities, resulting in a more efficient process, with more transparency for state agencies and the public. This designation does not remove any of the stringent environmental standards or permitting requirements necessary for the Graphite Creek project and enhances Graphite One’s ongoing commitment to local stakeholders for a transparent and thorough permitting process.

The Graphite Creek designation comes as a new US Presidential Administration highlights EVs and the EV infrastructure as central to its green energy policy.

What we expect from the Biden Administration is to simply make one of their policies to make gigafactories across the whole country at scale in order to turbo-charge and protect their biggest automobile companies such as Ford Motor Co. and General Motors.

The World Bank’s Climate-Smart Mining Initiative includes graphite among its clean-tech, green-tech materials, projecting global graphite demand to rise 494% between 2020 and 2050. According to the USGS, “Graphite’s use in rechargeable batteries, as well as technologies under development (such as large-scale fuel-cell applications), could consume as much graphite as all other uses combined.” As a result, projects like Graphite One’s Graphite Creek will provide essential supply chain infrastructure for the United States’ green tech/clean tech sectors.

The Graphite One Project is proposed as a vertically integrated enterprise to mine, to process and to manufacture high-grade CSG primarily for the lithium-ion electric vehicle battery market. As set forth in the Preliminary Economic Assessment, potential graphite mineralization mined from the Graphite Creek Property is expected to be processed into concentrate at a graphite processing plant. The proposed processing plant would be located on the Graphite Creek Property situated on the Seward Peninsula about 60 kilometers north of Nome, Alaska. 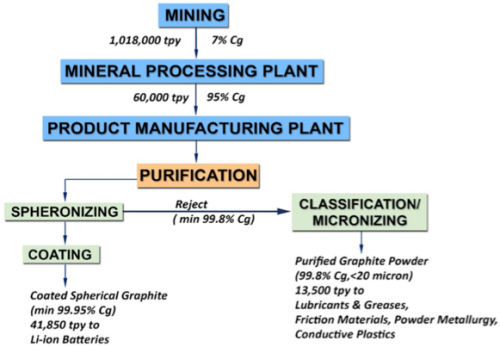 CSG and other value-added graphite products, would likely be manufactured from the concentrate at the Company’s proposed graphite product manufacturing facility, the location of which is the subject of further study and analysis. The company intends to make a production decision on the Project once a feasibility study is completed.

CA$8 million funding. Graphite One also intends to complete a non-brokered private placement offeringto raise gross proceeds of up to C$8,000,000 (US$6.3 million).

The net proceeds will be used for exploration and development of the Graphite Creek Project and for general working capital purposes including Graphite One’s Pre-Feasibility Study, projected for completion by the end of Q2 2021.

Closing is expected to occur around the end of February 2021, subject to receipt of final applicable regulatory approvals including approval of the TSX Venture Exchange. All securities issued in connection with the Offering will be subject to a restricted period that expires four months following the date of issuance.

Are we sure that graphite anodes have a significant future? Sure the current Lithium Ion batteries have such anodes and the expected first generation of Solid State batteries may use them, but we're likely to get back to a more metallic lithium or other lighter alloy after the mid- to late-2020s, especially in smaller/3rd-world cars (and ALL trucks/ bigs) that need better safety (fire/explosion), weight-to-charge ratio, and simpler manufacturing. That being said, perhaps increased fuel-cell integration/ other-electronics manufacturing may make up for lost high-quality graphite quantities.

The industry uses what works for them, Why does Toyota still use NiMh in their hybrids? Because it works for the target application. Current Giga factories that are in the pipeline will use graphite, that is just fact. Over time they may use less graphite per kWh with adding silicon (Tesla plan). Solid state won't ramp up as quickly as people think, just look at the QS presentation, 90 GWh by the 2029, World will be at 4+ TWh by then, predominantly on graphite anode. Installed capacities will then produce this "old school" cells for at least 10 more years, just because they will be cheap to make and good enough for target applications.