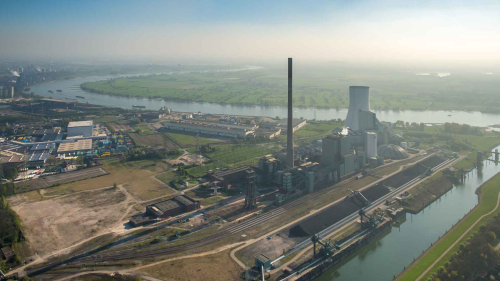 The STEAG power station in Duisburg-Walsum, the site for the construction of a large-scale green hydrogen generation system. ©euroluftbild.de/Hans Blossey

The study will lay the basis for the subsequent project development. All three parties involved are planning to participate as investors and will actively seek private and public funding.

The hydrogen strategies recently adopted by the state of North Rhine-Westphalia as well as those of the German Federal Government and the European Union underline the importance of hydrogen for a climate-neutral society. They endorse the development of a hydrogen economy and infrastructure in Germany and in Europe.

In the coming years, thyssenkrupp Steel’s climate strategy will entail a continuously increasing and constant demand for green hydrogen. In a first step, this hydrogen is to substitute part of the carbon in the existing blast furnaces, later on it is to be used in new direct reduction plants.

In the next few years, the company expects the conversion of one blast furnace to result in an annual demand of around 20,000 tonnes of green hydrogen. This demand will increase to some 720,000 tonnes per year by 2050 as a result of the gradual conversion of the plants and equipment.

With a capacity of up to 500 megawatts (MW), the projected electrolysis plant on the STEAG site could produce as much as about 75,000 tonnes of green hydrogen each year—enough for the first direct reduction plant of the steel producer. It would thus make an important contribution to the short- and long-term supply of the steel mill.

At its core, our climate transformation is based on the use of hydrogen. It is the key to using the great potential we have in reducing CO2 emissions in the steel industry. It is important to plan ahead. We must set the course for supply today so that we can produce climate-neutral steel tomorrow. In this context, the cooperation between three companies based in the region is an important element. With this project, we will lay the foundation of a hydrogen economy in North Rhine-Westphalia. Moreover, this project offers investors the possibility to directly invest in this growth market.

The immediate proximity of the sites allows optimum transport connections to the steelworks: The project includes the construction of two new pipelines to transport hydrogen and oxygen from Walsum to the steel mill less than three kilometers away.

The connection to the extra high-voltage grid ensures the supply of green electricity for the electrolysis; large-scale battery systems ensure grid stability. The approximately 15-hectare site in Duisburg-Walsum offers the possibility to erect electrolysis units with a total capacity of up to 500 MW. It also has a connection to the existing natural gas network, which in the future could also be used for the transport of hydrogen.

With the “HydroHub“ in Völklingen-Fenne, Saarland, a project outline included by the Federal Ministry of Economics in the group of ”Real-World Laboratories of the Energy Revolution”, STEAG has already gained experience in the field of hydrogen economy.

The water electrolysis system will be installed by thyssenkrupp Uhde Chlorine Engineers’ product division Green Hydrogen and consists of pre-fabricated standard modules. This modular system allows to easily scale up a plant to several hundred megawatts or gigawatts.

This kind of sector coupling enables new business models and a sustainable circular economy, which is to be completely powered by renewable energy sources in the future. Together with the Business Unit Chemical and Process Technologies, thyssenkrupp in Dortmund is able to supply the entire range of green chemicals, from hydrogen to ammonia, methanol and synthetic natural gas, thus contributing significantly to a climate-neutral industry.

The project will be open to investors: Aside from participating in the project development, investors can acquire shares in the new operating company to be founded. In doing so, investors finance—together with the project partners—the development and construction of the water electrolysis plant and the connection to the steel mill, while securing a stable cash flow due to the regular purchase of green hydrogen and oxygen by thyssenkrupp Steel.

The geographical proximity to the customer makes the project largely independent of third parties and facilitates its swift realization. Apart from attracting investors, the project partners will also apply for public funding granted within the scope of state aid for climate-neutral technologies.

The project development is planned to start as soon as a positive result of the feasibility study is obtained.

This sounds like a better use of H2 than piping it miles away and using it in fuel cells.
I assume they only take the electricity when there is excess on the grid, or at least not when fossil fuels are being burned ....

You are absolutely right about steel making and other hydrogen-consuming industry being more important use of hydrogen than cars - insofar as the only other option to decarbonize those industrial sectors would be carbon capture and storage. Not that there's anything wrong with CCS (my specialty) but not all locations are well suited for subterranean sequestration.

The article does not mention any on-site hydrogen storage facility. An I am quite sure the steel plant cannot or is not willing to stop production when there's little wind or solar.

This is why a hydrogen grid - connected to underground storage volumes - is so important to create for the future.

While it is impossible to everything perfectly, the Germans are taking the correct approach; converting a steel plant to hydrogen reduction of iron ore using grid electricity for electrolysis, while waiting for 1) the grid to become 'greener' and 2) for a dedicated hydrogen network to capture and store the potential 'green hydrogen' from excess wind and solar. The alternative would have been to commit to another 2-3 decades of iron ore reduction with graphite and the ensuing CO2 emissions.

Actually, after reading the article again, I am not sure whether they can in fact operate the blast furnaces on a mixture of hydrogen and carbon. If so, they could potentially change the mix according to projected renewable generation (as opposed to minute-to-minute response to wind loads).

Let's not forget either that Germany has a strong hydrogen strategy for exactly this sort of purpose and large companies have a clear interest in proving their commitment to the Paris agreement and not least the national strategy.

Let us hope that Thyssenkrupp is setting a precedence here wrt steel making. This is an important contribution to CO2 emissions reduction.

@Thomas, It is a pity the Germans shut down (or plan to) their nuclear reactors and then replaced them with lignite thermal plant.
If they really wanted to reduce CO2 (rather than just turn off the nukes) they could have switched to gas.
Or just kept the nukes going to the end of their natural life while reviewing safety int he mean time.
It is noteworthy that while we all know the names Fukushima, Chernobyl, Windscale and 3 Mile Island, we have no such names for Germany or France.