A new study by a team from Environmental Health & Engineering (EH&E) has found that greenhouse gas emissions from corn ethanol are 46% lower than those from gasoline—a decrease in emissions from the estimated 39% done by previous modeling.

The report, led by David MacIntosh, Chief Science Officer of Environmental Health & Engineering, Inc. (EH&E) and Adjunct Professor of Environmental Health at Harvard’s T.H. Chan School of Public Health, and consulted by dozens of experts in academia, updates ethanol’s carbon intensity score to reflect how continuous improvements in technology and practices have driven further emissions reductions in the lifecycle of ethanol and will lead to net zero renewable fuel in the future.

The findings are published in an open-access paper in the journal Environmental Research Letters.

The carbon intensity of corn ethanol, the primary renewable fuel used in transportation, has been actively researched and quantified over the last three decades. Reliable estimates of greenhouse gas emissions for corn ethanol are important since these values help determine significant policy and market decisions on state, national, and international levels.

Compared to earlier analyses, recent life cycle analyses for corn ethanol contain updates to modeling systems and data that reflect: (1) market-driven changes in corn production that lowered the intensity of fertilizer and fossil fuel use on farms; (2) more efficient use of natural gas and recent electric generation mix data for energy consumed at ethanol refineries, and (3) land use change analyses based on hybrid economic-biophysical models that account for land conversion, land productivity, and land intensification. 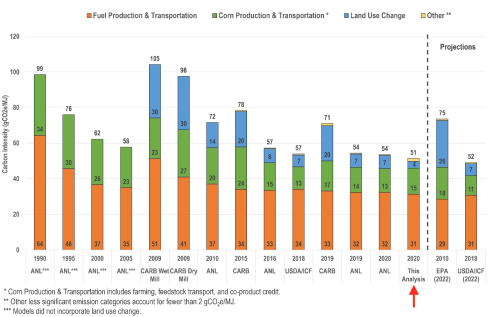 Timeline of estimated corn ethanol life cycle greenhouse gas emissions for 1990 through 2020 with projections out to 2022. Scully et al.

The team found that the largest components of total carbon intensity are ethanol production (29.6 gCO2e/MJ, 58% of total) and farming practices net of co-product credit (13.2 gCO2e/MJ, 26%), while land use change is a minor contributor (3.9 gCO2e/MJ, 7%).

The researchers suggested that market conditions that favor greater adoption of precision agriculture systems, retention of soil organic carbon, and demand for co-products from ethanol production may lower the carbon intensity of corn ethanol further.

In light of the United States’ renewed effort to achieve a net zero carbon economy, our research team believes this critical review is a timely contribution to establishing an accurate, common understanding of the greenhouse gas profile for corn ethanol in comparison to gasoline refined from crude oil. Our findings indicated that displacement of gasoline with ethanol produced from biofuels yields greater greenhouse gas benefits than are generally recognized and that prior analyses of the payback period for conversion of land to corn production should be updated.

We believe the results of our analysis are relevant to continued development and refinement of low carbon fuel standard programs in the US.

EH&E’s new research further underscores the impact biofuels have on greenhouse gas emissions and the technological improvements on GHG data collection. A study done late last year found that transitioning to higher ethanol blends (from E10 to E15) would lower greenhouse gas emissions by 17.62 million tons per year, the equivalent of removing approximately 3.85 million vehicles on the road.