Home About Contact RSS GCC Twitter Newsletter
TuSimple and Aeva partner to deploy 4D lidar for autonomous trucking
Nissan to be carbon-neutral by 2050; 100％ of new vehicle offerings in key markets to be electrified by early 2030s

Scientists at Tokyo Institute of Technology (Tokyo Tech), Tohoku University, National Institute of Advanced Industrial Science and Technology, and Nippon Institute of Technology, have demonstrated by experiment that a clean electrolyte/electrode interface is key to realizing high-capacity solid-state lithium batteries (SSLBs). Their findings could pave the way for improved battery designs with increased capacity, stability, and safety for both mobile devices and electric vehicles. A paper on their work appears in the journal ACS Applied Materials & Interfaces. 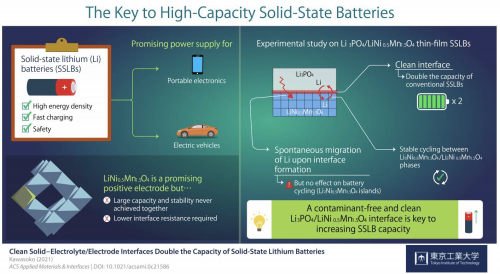 However, there are still many technical challenges preventing commercialization. For the current study, researchers conducted a series of experiments and gained insight that could take SSLBs’ performance to the next level.

Previous studies had hinted that producing a clean electrolyte/electrode interface was essential to achieve low interface resistance and fast charging in LNMO-based SSLBs. Scientists also noted that Li ions spontaneously migrated from Li3PO4 (LPO) electrolyte to the LNMO layer upon fabrication, forming a Li2Ni0.5Mn1.5O4 (L2NMO) phase in LNMO with unknown distribution and impact on battery performance.

The team investigated what the L2NMO phase was like, analyzing the changes in crystalline structure between the Li0Ni0.5Mn1.5O4 (L0NMO) and L2NMO phases during charging and discharging. They also studied the initial distribution of L2NMO at clean LPO/LNMO interfaces fabricated in a vacuum, as well as the effect of electrode thickness.

Strikingly, the clean interface facilitated the intercalation and deintercalation of Li during charging and discharging of the SSLBs. As a result, the capacity of SSLBs with a clean interface was twice that of conventional LNMO-based batteries. Moreover, this study marked the first time stable reversible reactions were found between the L0NMO and L2NMO phases in SSLBs.

Our findings indicate that the formation of a contamination-free, clean LPO/LNMO interface is key to increasing the capacity of SSLBs while ensuring low interface resistance for fast charging.