Solaris Bus & Coach and Dutch carrier Arriva Netherlands have signed an agreement for the delivery of 10 Solaris Urbino 12 hydrogen buses. The 12-meter hydrogen buses will be delivered to the province of Gelderland in the course of this year. Arriva will start driving them in December 2021 in the Achterhoek region and the cities Zutphen and Apeldoorn. 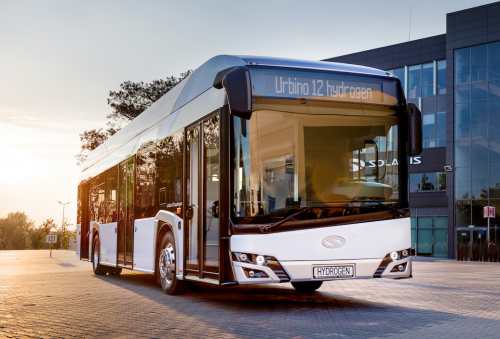 Gelderland is the largest province in the Netherlands, located in the centre-east of the country. At the end of last year, the Provincial Executive of Gelderland announced that it was participating in the European JIVE2 program (Joint Initiative For Hydrogen Vehicles Across Europe), which focuses on the promotion of emission-free public transport. The aim is to increase the number of hydrogen buses in public transport, inter alia through subsidies of €148,000 per bus. Across Europe, this includes subsidies for 152 buses in 14 European regions.

The ten 12-meter hydrogen-powered Solaris buses will replace the current diesel buses and will cover more than 1 million kilometers per year.

Solaris’ hydrogen buses are also fitted with a Solaris High Power battery. The hydrogen needed to propel the Urbino 12 hydrogen bus will be stored in gaseous form in tanks with a total volume of 1560 liters, mounted on the bus roof.

Each bus ordered can carry up to 85 passengers, including 37 people seated. The vehicle will feature a door layout of 1-2-0.

Automatic driver assistance systems include, among other things, the MirrorEye system that replaces conventional side mirrors with cameras, and the Mobileye Shield+ system of intelligent cameras monitoring the close surroundings of the vehicle, thus minimizing the risk of colliding with pedestrians or cyclists. Drivers will be alerted to potential dangers with sound and visual signals.

Driving on hydrogen is new for Arriva Netherlands. Thanks to its commitment to regular regional transport, Arriva will cover a record number of kilometers with the newly purchased buses. It is a condition of the JIVE2 project that in the period December 2021 to December 2024 each hydrogen bus drives at least 50,000 kilometers per year. Arriva and the province of Gelderland are aiming at 100,000 kilometers per year. The carrier, with the support of the province, is also committed to building a hydrogen filling stations by December 2021.

Since the launch of the Urbino 12 hydrogen in June 2019, Solaris has been awarded orders from the Netherlands, Germany, Italy and Sweden for 69 hydrogen buses in total.

from their website:
hydrogen fuel cell: 70 kW
volume of the hydrogen tanks: composite tanks 5x312l
So the content of the cylindrical tanks is more than 1.5 m³

The bus is driven by an axle with two integrated electric motors, each with an output of 125 kW. Solaris indicates a range of up to 350 kilometres.

This is exactly (only) as much power as the standard range Tesla model 3 (250 kW), with a range of 409 km. If triple the amount of batteries were included in the bus as in model 3, they would surely provide more than 350km in the bus.

The "old" Tesla batteries are around 260 Wh/kg or 711 Wh/litre. The newer Tesla batteries are even (much) better.
So, a 200 kWh battery would weigh about 770 kg, and have a size of 281 litres. (somewhat more due to the power electronics, packing and cooling system)
Compare this with the huge H2 tanks of 1500 litres internal volume + the fuel cell.

A battery bus would be much, much cheaper, much more reliable, and consume 1/3 the amount of primary electricity than with the wasteful hydrogen. City busses are particularly suitable for batteries as they can be charged intermittently (but even then, with a 200kWh battery, a city bus would probably hardly have to recharge during the day)

Placing a number of chargers is also immensely cheaper in installation and operation than a hydrogen fueling station. From an ecological point of view, it wouldn't waste 2/3 of the electricity through the wasteful H2 cycle.

Even more importantly, it wouldn't provide an excuse to the fossil industry to "green" their image as the H2 provider while still producing H2 from fossil fuels and dumping the CO2 in the atmosphere. This last point is most probably why H2 busses are proudly promoted. I cannot imagine that the politicians are not capable of making this simple calculation and independently come to the obvious conclusion that batteries are much more economical and ecological.