Unmanned aerial systems (UAS) specialist Blue Bear Systems Research, a UK Small to Medium Enterprise, has formed a seven-strong consortium to develop a next-generation, all-electric propulsion module to enhance aircraft performance while reducing operating costs. The propulsion module is a scalable design and is the first in a range of products that can be used for aircraft less than 5 tonnes in the near term.

The project—Integrated Flight Control, Energy Storage and Propulsion Technologies for Electric Aircraft (InCEPTion)—is supported and co-funded by the UK’s Aerospace Technology Institute and Innovate UK and was launched this month. The 24-month project will deliver a highly power-dense, quiet and efficient propulsion module with zero emissions out.

The future electrification of aircraft propulsion will have a significant positive environmental effect, helping to reduce emissions and lower the carbon footprint of aviation. The InCEPTion consortiums propulsion module will bring game-changing technology to manned and unmanned aviation, delivering unrivalled performance and value in this newly emerging sector.

The propulsion module will be inherently scalable, enabling different combinations of the same module to power multiple aircraft concepts, such as large cargo drones, electric vertical take-off and landing (eVTOL), general aviation aircraft and sub-regional aircraft. This will enable a broad range of new mobility services across the UK, from large cargo delivery to regional commuting. 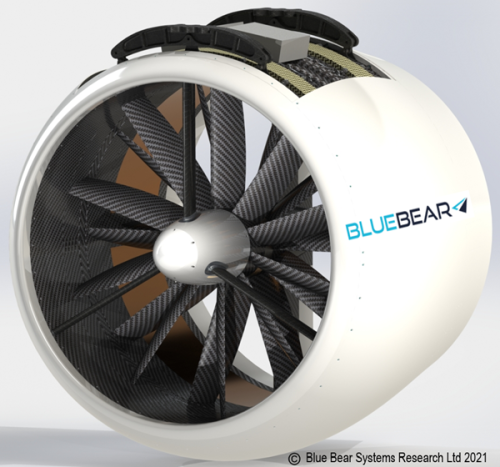 Blue Bear Systems Research will lead the consortium which includes:

The project is supported by the ATI Program, a joint Government and industry investment to maintain and grow the UK’s competitive position in civil aerospace design and manufacture. The program, delivered through a partnership between the Aerospace Technology Institute (ATI), Department for Business, Energy & Industrial Strategy (BEIS) and Innovate UK, addresses technology, capability and supply chain challenges.

The FFC supports the development of new technologies in the UK, including freight-carrying drones, urban air vehicles, and hybrid-electric regional aircraft. It is funded by £125 million from the Industrial Strategy Challenge Fund, which is, in turn, expected to be matched by up to £175 million from industry.

The group will work to integrate quieter, more efficient, and less polluting aircraft within the rest of the transport infrastructure, ensuring aircraft can fly to and from a cost-effective network of small operating bases. The group will also develop the supporting ground infrastructure, regulation and control systems required to use these new aircraft practically and safely, whilst the value of a mixed-use airspace will be demonstrated through innovative simulation and real-world applications.

A long way to go; but, a beginning.
The difficult problem is launching an aircraft to altitude without great amounts of pollution, This may require jet engines burning hydrogen then using ducted fans for cruising,

Why not used tethered power for initial vertical take off and then switch to batteries.
Say it goes straight up 50-100m on a cable, then drops it and flies off horizontally.
You would need a way of getting the cable down safely from the plane, and a very reliable disengage mechanism for the connector.

@ mahonj:
That's common procedure on aircraft carriers; they just don't use cables. On an airfield, linear 3-P e-motors - fed from the grid (via a buffer) - could be used for initial acceleration.

or a detachable supercapacitor/battery pack to get the plane to an adequate altitude, which subsequently disconnects and glides back to the launch site to recharge .

The problem with all of these concepts is that aircraft (except for sail planes) require a relatively high continuous power for cruise. While full power is used for takeoff and the initial climb out, the power is only reduced to around 75 to 85 % for cruise.

@yoat, it often struck me that you could build booster catapults for airliners at high and hot airports, or for airports that require extra range.
Thus, instead of using a 91m long catapult (EMALS) on an aircraft carrier, you could have a 1000 m catapult with much lower power that would enable an overloaded airliner to take off (and fly further).
It would only provide an extra 10-20% power on top of the turbofans, so there wouldn't be too much stress on the landing gear or passengers.
You would only use it for overloaded flights, like London - Syndey (or the return journey).
The advantage would be to get an extra 10-20 tons of fuel into the air to enable the longer flight.

@Alain.
Interesting, like a cross between a drop tank and a GPS guided glide bomb (a big one...).
It would be nice to drop 1/2 your battery weight when it was expended.
However, it would have to work very well. I wouldn't like to be under a 5000kg battery with a damaged wing.
Another advantage would be that you could have the batteries pre-charged when the aircraft lands. You might drop the batteries onto a rail head or transport hub so you could move the batteries back to the airports. (Starting to get complicated now ...)

Most of the flights people are talking about are quite short range island or inlet hops so 500km range would not be needed (nor would you have to fly particularly fast).

Super cap packs on parachutes could work,
have to watch what is on the ground.

Another possibility could be a launching ramp with a low incline that after 1000 - 1500 mtrs. would be 20 - 30 mtrs. above ground level where upon departure of same the plane would be airborne.