Volkswagen’s Transparent Factory in Dresden has begun series production of the battery-electric ID.3. This makes it the second production site for the ID.3 and the fourth site in the world producing Volkswagen models based on the Modular Electric Drive Toolkit (MEB). 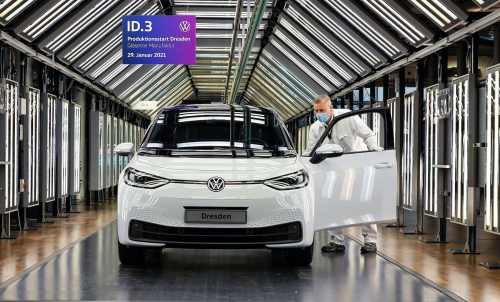 Over the coming years, the former “Center of Future Mobility” in Dresden will steadily transform into the “Home of the ID.” The central goal is to act as a beacon for Volkswagen in Germany, offering customers, visitors and guests a holistic experience of the ID. family—from initial advice and test drives, to production visits, co-constructing the ID.3 and modern event formats, up to the handover of electric vehicles.

An additional focus of the strategic realignment is the development of a research and innovation site that drives innovative projects on a pilot scale for later use in large capacity sites at Volkswagen.

Volkswagen is continuing to pursue its electric offensive. In addition to new electric models, this also includes the transformation of the global production network. At Dresden we are already converting the fourth Volkswagen site to the new ID. family and the MEB. At the same time we are ramping up volume production in the Zwickau electric car plant and in our two Chinese MEB plants every week. In doing so we reaffirm our ambitions to take on a role as global leaders in electric mobility.

—Thomas Ulbrich, Member of the Board of Management for Electric Mobility at Volkswagen

MEB production network. The Dresden Transparent Factory is the fourth site in the world producing Volkswagen electric cars based on the Modular Electric Drive Toolkit. The first site, the Zwickau plant, kicked off MEB production. At the end of 2020, the Chinese sites in Anting and Foshan also started production of MEB vehicles. Together, these four plants have a maximum production capacity of more than 900,000 vehicles a year. The next sites in Emden, Hanover and Chattanooga (USA) are also preparing for MEB production. 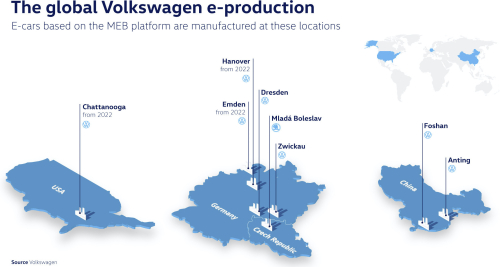 Added to this is the ŠKODA plant in Mladá Boleslav, which has also already started MEB production. In the future, up to 350 all-electric ŠKODA ENYAQ iV vehicles will roll off the production line there every day. All MEB plants are still in the ramp-up phase. In the future, however, this production network will have a maximum production capacity of up to one million e-vehicles per year.

Towards the end of 2020, the Chinese sites in Anting and Foshan began producing the ID.4 CROZZ and ID.4 X MEB models. The plant in Anting is a pure e-car plant and the world’s first newly built MEB plant by Volkswagen. In the future, the Foshan plant will be able to build both conventional models with combustion engines based on the MQB platform and purely electric MEB models on a shared production line. Both plants were fully brought up to series production within just two years and each has a maximum production capacity of 300,000 units per year.

In addition to the vehicle-producing plants, Volkswagen Group Components plants are also repositioning themselves for e-mobility. The plant in Kassel, for example, supplies electric drives and platform parts for the MEB architecture. The MEB battery system is developed and manufactured at the Brunswick and Foshan sites.

The core elements of electric motors—rotor and stator—are supplied from the Salzgitter components plant. And with the Center of Excellence Battery Cell (CoE), the Group-wide know-how for battery technology is also bundled in Salzgitter. This also includes manufacturing: Right next door, the first battery cell factory of the Northvolt Zwei joint venture will be built by 2024 in cooperation with the Swedish battery manufacturer Northvolt AB.

I am more inclined to buy a VW than a Tesla as I do not need 0-60 in 3.5 seconds, but I do need service and support.
I hope the VW prices come down as they ramp up production and bring out cheaper versions of the ID3 and ID4.
I suppose that will depend on competition from other manufacturers like Renault (Zoe), Hyundai and Nissan.

I'm convinced that, generally, the high price of EVs is not based solely on the relative high price of a battery.
Car MFRCs have a low margin of profit on conventional ICE vehicles. Their (blind) profits are based on spare parts and maintenance philosophy. In comparison, an EV has very low maintenance and subsequently lacks those avenues of profit. I can't imagine that any MFRC would be satisfied with these inevitable results. One way to "iron that out" would be to slap those missing profits right unto the sales price and that makes EVs really expensive.

Yoatman, that works up to the point where the competition, like Tesla, decides it's more important to transition the world is more important than making money from servicing, although... the new Ioniq 5 looks interesting. Wonder about pricing though.

@ Paroway:
Well, Tesla is in a completely different boat. They have the great advantage that they're not confronted with the task of transitioning from ICE-vehicle production to EVs; that switch is a considerable disadvantage for conventional MFRCs. Besides that, Tesla's existence is not sponsored from welfare and moral obligations / philosophies. They burned millions of dollars until they finally started to reach profitable levels.