Orders for the all-new Nissan Note e-POWER have surpassed 20,000—more than double the compact car’s monthly sales target—since it was released in Japan in late December. (Earlier post.) Equipped with Nissan’s e-POWER electrified powertrain, the fully refreshed Note went on sale on 23 December with a monthly sales target of 8,000 vehicles. As of 1 February, Nissan has received orders for 20,044.

Approximately 80% of the Note orders were for the highest grade, “X.” Additionally, in a first for a Nissan compact car, about 40% of customers opted for the ProPILOT with Navi-link advanced driver support system. More than half ordered the NissanConnect navigation system, Intelligent Around View Monitor, and Adaptive LED Headlight system, further underscoring the high demand for Nissan Intelligent Mobility technologies. 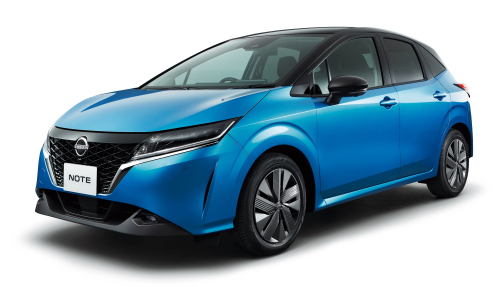 The all-new Note has been well received in Japan due to its smooth acceleration, stable deceleration control and outstanding cabin quietness. Built on a newly developed platform, it features Nissan’s enhanced second-generation e-POWER system and advanced interior and exterior design that embodies the electrified era.

e-POWER comprises a high-output battery and the powertrain which is integrated with gasoline engine, power generator, inverter and a motor. In conventional hybrid systems, the wheels are driven by an electric motor and a gasoline engine. However, in the e-POWER system, the gasoline engine is not connected to the wheels; it simply charges the battery. And unlike a full EV, the power source is the engine, rather than just the battery.

The e-POWER system includes a gasoline engine with a power generator, an inverter, a battery and an electric motor. Used solely to charge the high-output battery, the gasoline engine always runs at an optimal speed. This leads to superior fuel efficiency and lower emissions compared with a traditional internal combustion engine.

e-POWER uses a smaller battery than the LEAF, but delivers the same driving experience as a full EV.

As Nissan’s best-selling model in its home market, the Note continues to play a key role in the Nissan NEXT global business transformation plan. By the end of fiscal year 2023, Nissan expects to deliver more than 1 million electrified vehicles, including EVs and e-POWER models, to customers around the world each year.

I wonder do they plan to make a plug in version with a small (6-12 kWh) battery that can be charged from the mains, or from a solar panel in the roof.
(You might be able to get 3 kWh from a roof panel (600 watts x 5 hours) in sunny places like the Southern US and Japan.
Maybe the larger battery would add weight and mess up the dynamics of the car.