The BMW Group will begin sourcing aluminum produced using solar electricity with immediate effect. This marks an important milestone on the road to the company’s goal of lowering CO2 emissions in its supplier network by 20% by 2030.

Producing aluminum is extremely energy-intensive. Generating the electricity needed to produce primary aluminum, i.e. aluminum obtained directly from the mineral compound alumina, is alone responsible for about 60% of the global aluminum industry’s greenhouse gas emissions. The use of solar electricity is therefore an effective lever for reducing the CO2 emissions associated with aluminum smelting.

That is why the BMW Group plans to source aluminum produced with green power in the long term—enabling it to avoid approximately 2.5 million tonnes of CO2 emissions over the next ten years. This is equivalent to about 3% of the CO2 targets the company has set for its supplier network.

We aspire to lead the way in sustainability and implement our sustainability goals in a systematic manner. We will be able to meet over 50% of our CO2 targets for the supplier network, just by using green power. The use of solar electricity for producing aluminum is a major step in this direction.

—Dr. Andreas Wendt, member of the Board of Management of BMW AG responsible for Purchasing and Supplier Network

The aluminum produced using solar power is processed in the light metal foundry at BMW Group Plant Landshut to manufacture body and drive train components, including those needed for electric drive trains. Sourcing 43,000 tonnes of solar aluminum valued in the three-digit million euros will supply nearly half the annual requirements of the light metal foundry at Plant Landshut.

The trend towards e-mobility means that a much larger percentage of a vehicle’s lifecycle CO2 emissions now comes from upstream added value in the supplier network. In an electrified vehicle, CO2 emissions from the use phase are much lower, but producing battery cells or aluminum is very energy-intensive. Without corrective measures, CO2 emissions per vehicle in the BMW Group supply chain would increase by more than a third by 2030. The company not only wants to stop this trend, but also reverse it—and even lower CO2 emissions per vehicle by 20% from 2019 levels.

The BMW Group has therefore already agreed with suppliers for its current fifth-generation battery cells that they will only use green power for producing battery cells.

The BMW Group is now taking the next logical step by sourcing aluminum produced with green power. Aluminum will become increasingly important as a lightweight material that can partially offset the heavy weight of the batteries in electrified vehicles.

Solar park in the desert supplies green power for aluminum production. The BMW Group already has a long-standing supply relationship for primary aluminum with Emirates Global Aluminum (EGA). EGA has now become the first company in the world to also use solar electricity for commercial production of aluminum, which it will initially supply exclusively to the BMW Group.

EGA sources the electricity used to produce the aluminum destined for the BMW Group from the Mohammed Bin Rashid Al Maktoum Solar Park in the desert outside of Dubai, which, in the final stage of development, is set to become the world’s largest solar park. It is operated by the Dubai Electricity and Water Authority, which has the electricity it produces sustainably certified by third parties, ensuring that it can supply EGA with power that is traceable and transparent. 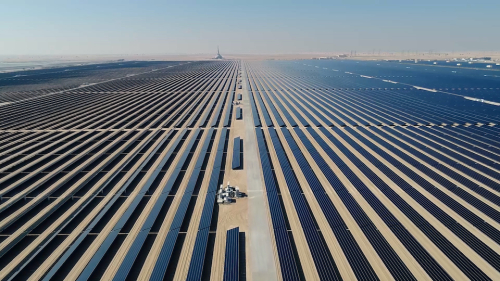 We are delighted to have the BMW Group as our first customer for low-carbon CelestiAL aluminum from EGA. Aluminum is light, strong and infinitely recyclable. That is why it plays such an important role in the development of a more sustainable society and in making modern life possible. But how sustainably the aluminum is produced is also important. Solar aluminum is a step in the right direction—it uses a natural and abundant source of energy in our desert environment to produce a metal that is vital to the future of our planet. 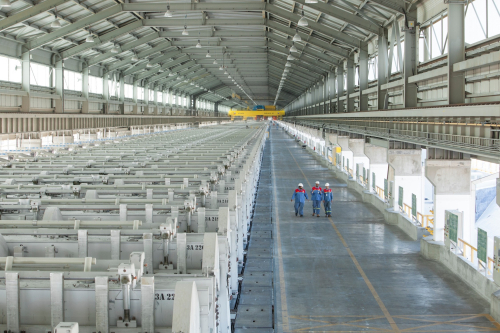 Aluminum potline (electrolytic reduction cells for the Hall-Héroult process) at EGA. Each cell is the size of a small swimming pool. 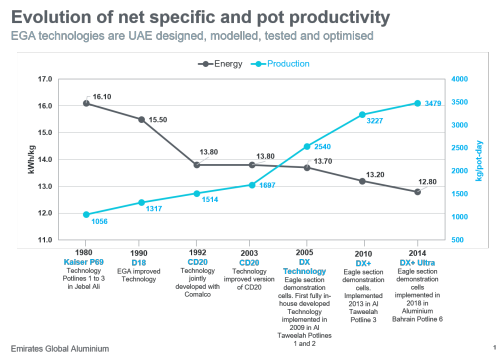 The aluminum produced with solar power is sustainably processed in the light metal foundry of the BMW Group Plant in Landshut.

The light metal foundry is one of the most state-of-the-art foundries in the world, BMW says. The innovative and sustainable production processes have won numerous awards. The light metal foundry also works with shaping sand cores, among other methods, to manufacture cast parts. The sand cores are produced using inorganic binders—making the casting process virtually emission-free. Five different casting methods are used for standard production of cast components. The most suitable casting method is selected, depending on the component concept, technological requirements and production volume.

The light metal foundry at BMW Group Plant Landshut was already certified for its sustainable use of aluminum back in December 2019. It meets the standards of the Aluminum Stewardship Initiative (ASI), an international non-profit organisation supported by environmental and industrial associations, NGOs, aluminum producers and processing companies.

ASI aims to maximise aluminum’s contribution to a sustainable society and defines sustainability criteria for an environmentally and socially responsible aluminum value chain. Through this initiative, following an audit by an independent third party, the BMW Group received confirmation that its light metal foundry handles aluminum in a conscious and responsible manner.

EGA was the first company headquartered in the Middle East to join the Aluminum Stewardship Initiative. EGA has supplied the BMW Group with primary aluminum since 2013.

EGA is an integrated aluminum producer, with operations ranging from bauxite mining to refineries and electrolysis, all the way to production of cast primary aluminum.

In 2019, EGA sold 2.6 million tonnes of cast metal. EGA is the only aluminum producer in the United Arab Emirates—making it the fifth-largest aluminum-producing country in the world.

With more than 400 customers in over 50 countries, EGA is one of the largest suppliers of foundry alloys to the automotive industry worldwide. EGA is certified to IATF 16949:2016, the latest global standard established by the automotive industry, which aims to ensure even more rigorous quality management in the global automotive supply chain.