Chiyoda Corporation, together with Mitsubishi Corporation, Mitsui & Co. Ltd and NYK Line, the other members of the Advanced Hydrogen Energy chain Association for technology Development (AHEAD), reported the successful completion of the world’s first global hydrogen supply chain system. The demonstration project, launched in 2015, was conducted by AHEAD and subsidized by the New Energy and Industrial Technology Development Organization (NEDO). (Earlier post.) 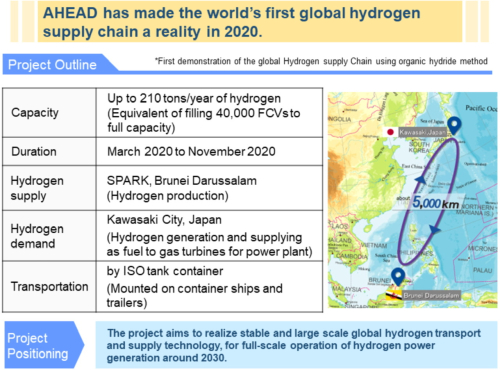 Demonstration was part of the project’s second phase (2017-2020) that included the design, procurement, construction and operation of facilities to validate the feasibility of the global hydrogen supply chain, based on the results of an infrastructure technology study completed in the first phase (2015–2017).

The hydrogen supply chain, which maximizes the use of existing infrastructure and meets international safety standards, commences with the procurement of hydrogen in the source country, overseas transportation to consuming countries in the form of methylcyclohexane (MCH) and distribution using Chiyoda’s SPERA Hydrogen technology. 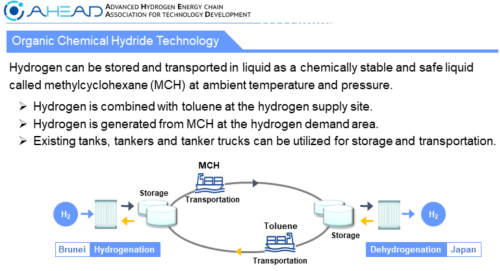 Hydrogen as liquid methylcyclohexane (MCH)—produced from toluene and hydrogen—can be safely and economically stored and transported. Both toluene and MCH are maintained in a liquid state at ambient temperatures and pressures. MCH is commonly used as a solvent, for example in whiteout correction tape, and has a low degree of risk as a chemical substance. By utilizing the organic chemical hydride (OCH) method with MCH, hydrogen in a liquid can be stored and transported at a compressed volume of approximately one 500th as that of hydrogen at ambient temperature and pressure.

Gaseous hydrogen is catalytically extracted from MCH through the dehydrogenaton process at the site hydrogen is supplied to hydrogen users. Toluene—a byproduct of the hydrogen extraction process—is repeatedly recycled as a raw material for producing MCH. Chiyoda has successfully developed the proprietary dehydrogenation catalyst for MCH and has conducted technological demonstrations to make the catalyst for practical use. Chiyoda has registered MCH including hydrogen for storage and transportation as the trade name SPERA Hydrogen.

By transporting and storing more than 100 tons of hydrogen over ten (10) months, the demonstration verified that the system is technically ready for commercial use and confirmed SPERA Hydrogen’s potential contribution to global carbon neutrality in 2050. Chiyoda will now expand the system towards semi-commercialization by the mid-2020s, reducing costs through economies of scale in line with increased hydrogen demand.