In its new report Rare Earths, Outlook to 2030, Roskill forecasts that rare earth magnet applications will account for ~40% of total demand by 2030, raising the potential for a tight supply-demand balance for key magnetic rare earth elements, as well as providing the opportunity for new production capacity to be financed, constructed and commissioned.

Roskill expects that rare earth permanent magnet applications represented 29% of total demand in 2020—the largest single end use—consuming a mixture of neodymium (Nd), praseodymium (Pr), dysprosium (Dy), along with other elements used at fillers such as cerium (Ce) and gadolinium (Gd).

Roskill forecasts that demand for rare earth permanent magnets in EV drivetrains will increase by more than 17.5% per year in the period to 2030, becoming the dominant end-use by a notable margin. The growth in RE permanent magnet demand in EVs is also expected to have implications for other end-use applications, which may be more price sensitive, with opportunities for substitution and thrifting in higher price scenarios.

The recovery and subsequent demand growth are underpinned by the green agendas being targeted by many national governments and international bodies looking to reduce carbon emissions. Rare earth products are widely used in the generation of renewable energy and in zero-low emissions transport, via the use of rare earth permanent magnets in wind turbines and in the drivetrains of hybrid and electric vehicles.

The supply of rare earths has become an increasingly geopolitical issue in the US, Europe and Japan, with Chinese market dominance seen as a supply risk for critical elements including neodymium (Nd), praseodymium (Pr) and dysprosium (Dy). China supplied roughly 85% of global total refined rare earth production in 2020, though for Dy alone, this increases to around 95% of global production.

The dominance of China in the rare earths industry has long been identified by other major markets, though the implementation of strategies to reduce dependency on Chinese supplies has gathered pace since mid-2019, with direct involvement by US, Russian, EU and Japanese governance, Roskill notes. 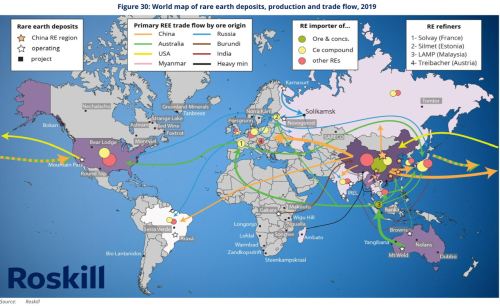 In 2020, Chinese mine production of rare earths is expected to reach 110kt, falling back from 2019, though continuing to represent >55% of global mine output. Production at both the mining and refined stages is controlled by quotas assigned to six state-owned enterprises, which are highly integrated throughout the rare earth supply chain. Non-Chinese mine production has increased significantly since 2015, with multiple producers achieving production of rare earth mineral concentrates as of 2020, though much of this feedstock is destined for the Chinese domestic market.

The Roskill report sets out Roskill’s independent ten-year outlook for the rare earths industry including analysis of supply, demand and pricing trends.