In 2020, a total of 134.5 GWh of passenger EV battery capacity was deployed globally into newly sold passenger BEVs, PHEVs and HEVs, an increase of 39.6% over the year prior, according to a bottom-up model-by-model analysis by Adamas Intelligence.

This figure excludes an additional 15 to 20 GWh of installed passenger EV battery capacity idling in sales channels and a further 15 to 20 GWh in pack and automaker assembly lines. 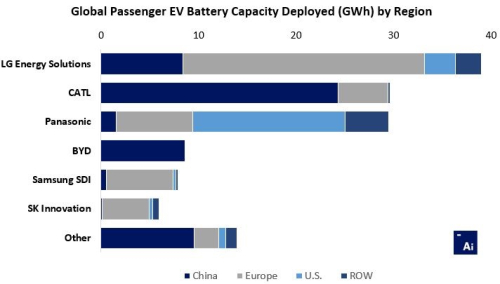 LG Energy Solution (battery spin-off from LG Chem) took the top spot in 2020 by passenger EV battery capacity deployed onto roads, thanks in large part to its supply agreement with Tesla in China, coupled with its broad book of clients in Europe, including VW, Renault and Mercedes, among others.

CATL claimed a distant second place in 2020, propped up by its dominant presence in China and strong entry into the European market in the second half of the year, courtesy of Tesla and Groupe PSA, among others.

In looking at EV sales channels and pack/automaker assembly lines, Adamas believes that CATL currently has the greatest volume of cells percolating through the supply chain and is poised to see a spike in battery capacity rolling onto roads in the first half of 2021.