Audi’s Neckarsulm site is the first automotive plant in the Volkswagen Group to use RFID (radio-frequency identification) technology for vehicle identification throughout the entire production process, thereby laying another cornerstone for fully connected production. An enhanced RFID data carrier is being used for the first time in the production of the fully electric Audi e-tron GT.

The use of uniform, innovative technologies forms the basis for the vision of the production’s fully connected and digitalized future. The Neckarsulm site will play a leading role in digital production and logistics and develop and test intelligent digital solutions for the entire Group.

—Peter Kössler, Board Member for Production and Logistics

The technology itself is not new: Audi and other Volkswagen Group brands have been using RFID technology for vehicle identification for a number of years in areas such as the assembly line and the body shop. However, Audi’s Neckarsulm site will now become the first automotive plant in the Group to deploy this technology across technical sections and throughout the entire production process.

An RFID data carrier (tag) consisting of a chip and an antenna will be attached to every Audi manufactured at the location—from the Audi A4 to the fully electric e-tron GT—in the body shop during the very first stage of production. The tag will be attached to the right rear section of the body and will stay on the vehicle as it passes through the paint shop and the assembly line right through to delivery to the customer. 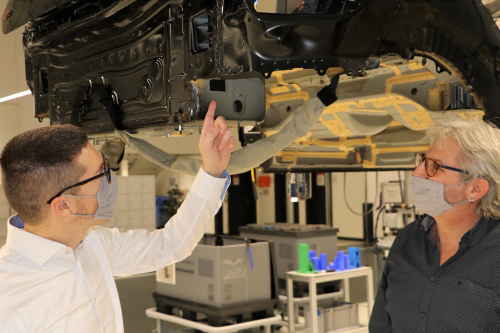 The chip contains an identification number. Key vehicle information, such as the body design, paintwork, motorization and equipment of the respective car, can be retrieved with the help of a reader in the production areas. Among other things, this ensures that every Audi that rolls off the production line is consistent with the configuration its new owner selected at the Audi dealer or at home. 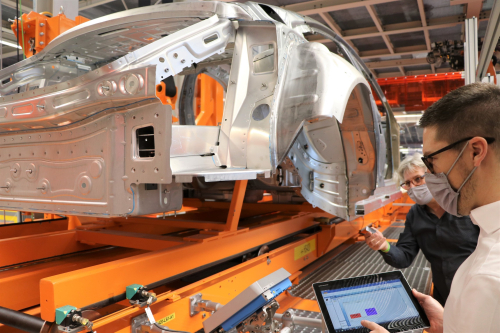 This involved previously different technologies as well as paper documents in some cases, making it impossible to connect all technical sections.

In consistently using RFID technology on the vehicle throughout the entire production process, we are the first manufacturer to provide all of the relevant data on a single data carrier fully digitally and in real time.

—Christian Schmidt, who is responsible for the project as part of the digitalization of production and logistics at the Neckarsulm site

In addition to the body shop, the paint shop and the assembly line, the universal rollout of the technology will have benefits in other non-production areas. For example, vehicle logistics will use the tags to locate and identify cars, helping to ensure that every Audi can be delivered to its new owner after completion. Audi employees can make use of a drone that flies autonomously over the vehicle dispatch area, collecting all of the relevant data. As an important element of fully connected factories, RFID technology will establish itself as the standard across all systems at Audi’s plants worldwide over the coming years. This enhanced version of the data carrier takes one of its original weaknesses and turns it into a strength: Previously it was not possible to attach an RFID data carrier directly to the vehicle body, as this interferes with communication between the tag and the reader.

The solution is to insert a spacer between the body and the tag. The OMT removes the need for this spacer. The enhanced version takes advantage of the direct contact between the vehicle and the tag: It improves transmission quality by using the body of the e-tron GT itself as an extended antenna. In the future, OMT tags will become a standard feature of the production of new vehicle models throughout the Group.

Audi’s Neckarsulm site will take a leading role in the area of digital production and logistics throughout the entire Volkswagen Group in the future. The location already has extensive expertise in the areas of vehicle production, logistics and production IT (large-scale and small-series production). The transformation is intended to strengthen these competencies in a targeted manner while developing the plant into a leading location in the area of digital production and logistics. Neckarsulm is focusing on “end-to-end factory transformation” and the provision of innovative IT solutions throughout the Volkswagen Group.