The government of the state of Victoria in Australia is providing more than $1 million in funding to CSIRO, Australia’s national science agency, that will enable it to partner with Swinburne University of Technology to establish the Victorian Hydrogen Hub (VH2).

The $10-million VH2 project is designed to bring researchers, industry partners and businesses together to test, trial and demonstrate new and emerging hydrogen technologies. Under the partnership, CSIRO will receive more than $1 million towards the development of a refueling station to fuel and test hydrogen vehicles.

The refueling station, to be located at CSIRO’s Clayton campus in Victoria, is a key milestone in the development of CSIRO’s national Hydrogen Industry Mission, which aims to support Australia’s clean hydrogen industry—estimated to create more than 8000 jobs, generate $11 billion a year in GDP and support a low emissions future. 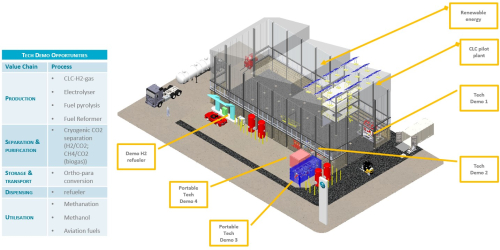 Some of the features of the refueling station.

As Australia considers energy alternatives, we know hydrogen is clean and will be cost-competitive—but a major barrier to it becoming a fuel source for cars and trucks is how to refuel, and the lack of refueling infrastructure. The refueler is a significant step towards removing that barrier.

Construction will take place as part of the development of VH2—a new hydrogen production and storage demonstration facility, where CSIRO, Swinburne and their partners will test real world uses for hydrogen technology.

The refueler project will demonstrate a fleet trial for CSIRO hydrogen vehicles with the potential for expansion, providing refueling opportunities to other zero emission Fuel Cell Electric Vehicles (FCEVs) in the local area.

CSIRO is engaging with vehicle companies such as Toyota Australia to support the future adoption and supply of FCEVs in Australia.

Hydrogen Industry Mission. CSIRO announced a program of national missions in August 2020, aimed at solving some of Australia’s greatest challenges. Missions are currently being developed.

The Hydrogen Industry Mission aims to help Australia work out how to scale up domestic hydrogen supply and demand for a low emissions future, and support a hydrogen energy export industry.

CSIRO is currently engaging with and inviting advisory, funding, R&D and translation partners to work collaboratively on initiatives.