The twelve Member States will provide up to €2.9 billion (US$3.5 billion) in funding in the coming years. The public funding is expected to unlock an additional €9 billion in private investments, i.e. more than three times the public support. The project complements the first IPCEI in the battery value chain that the Commission approved in December 2019 with €3.2 billion in public support. (Earlier post.) 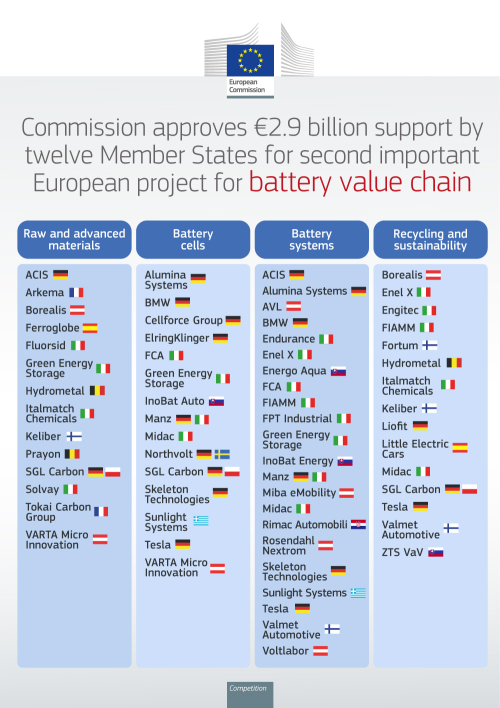 The project will cover the entire battery value chain from extraction of raw materials, design and manufacturing of battery cells and packs, and finally the recycling and disposal in a circular economy, with a strong focus on sustainability.

The project will involve 42 direct participants, including small and medium-sized enterprises (SMEs) and start-ups with activities in one or more Member States. The direct participants will closely cooperate with each other through nearly 300 collaborations envisaged, and with more than 150 external partners, such as universities, research organisations and SMEs across Europe. The overall project is expected to be completed by 2028 (with differing timelines for each sub-project).

Background. The Commission’s approval of this project forms part of the context of the wider Commission efforts to support the development of an innovative and sustainable European battery industry. In 2017, the Commission launched the European Battery Alliance. In 2018, the Commission adopted the Strategic Action Plan for Batteries and has promoted a wide range of initiatives as part of the plan.

In view of the growing importance of batteries in a number of areas, including notably transport and energy, a safe, circular and sustainable battery value chain will be increasingly essential. Having batteries that are more sustainable throughout their life cycle is key to achieve our ambitious climate targets. This is also at the core of the Sustainable Batteries Regulation proposed by the Commission in December 2020.

This new decision is the third research and innovation project based on the 2014 State aid Communication on Important Projects of Common European Interest (IPCEI), setting out criteria under which several Member States can support transnational projects of strategic significance for the EU under Article 107(3)(b) of the Treaty on the Functioning of the European Union (TFEU). The Communication aims to encourage Member States to support highly innovative projects that make a clear contribution to economic growth, jobs and competitiveness.