Although silicon anodes could greatly boost the capacity of Li-ion batteries, their performance rapidly degrades with use. Polymeric coatings can help solve this problem, but very few studies have explored the underlying mechanisms. Now, researchers from Japan Advanced Institute of Science and Technology have investigated a poly(borosiloxane) (PBS) coating to stabilize the capacity of silicon anodes, paving the way for better and more durable Li-ion batteries for electric cars and renewable energy harvesting.

The study, led by Professor Noriyoshi Matsumi with Dr. Sai Gourang Patnaik and Dr. Tejkiran Pindi Jayakumar, who were completing a doctoral course at JAIST at the time, is published in ACS Applied Energy Materials. 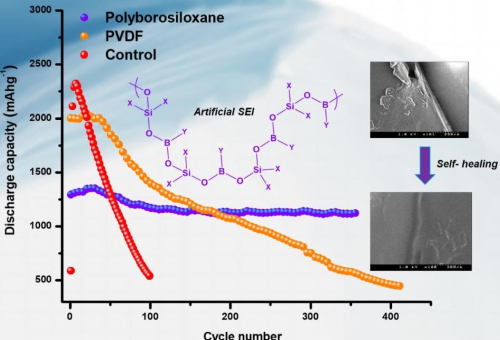 With its self-healing properties, the PBS coating offers a much more stable performance in terms of capacity compared to a bare anode or one coated with PVDF, a polymer commercially used in lithium-ion batteries. Credit: Noriyoshi Matsumi from JAIST

Polymeric coatings can solve one of the most serious drawbacks plaguing silicon anodes: the formation of an excessively large solid electrolyte interphase (SEI). The spontaneous formation of the SEI between the electrolyte and the anode is essential for the long-term performance of the battery. However, materials such as silicon tend to expand greatly with use, which causes continuous SEI formation and the depletion of the available electrolyte. This hinders the performance of the battery and causes a massive drop in capacity over time.

This is where polymeric coatings come into play; they can prevent the excessive SEI formation on silicon and form an artificial and stable SEI. Though researchers had already noted the potential of PBS as a coating for silicon anodes, previous studies did not offer clear explanations for the mechanisms at play.

There are very few reports on well-defined PBS-based polymers that offer a mechanistic origin for their application and their effects. Thus, we wanted to evaluate and shed light on their contribution to silicon anodes as a self-healing artificial interface that also prevents detrimental volume expansion.

The team compared the short- and long-term performance of silicon anodes with and without polymeric coatings in terms of stability, capacity, and interfacial properties. They did this through a series of electrochemical measurements and theoretical calculations, which led them to understand how PBS helps stabilize the capacity of the silicon anode.

Compared to bare silicon anodes and anodes coated with poly(vinylidene fluoride) (a commercially used coating in LIBs), the self-healing properties of PBS and its reversible accommodation of lithium ions resulted in remarkably enhanced stability.

This is partially due to the ability of PBS to fill in any cracks formed in the SEI during operation. The capacity of the PBS-coated silicon anode remained almost the same for over 300 hundred cycles, unlike that of the other two anodes.

By addressing the main issues associated with silicon anodes, this study paves the way to a new generation of LIBs with much higher capacity and durability.