Roskill expects only 3.2% reduction in shipping emissions of spodumene concentrate by 2030; order of magnitude below IMO ambition

Shipping emissions form a significant part of the commodity supply chain’s carbon footprint, particularly for those commodities reliant on the mass transport of low-grade ores and concentrates. Roskill has analyzed the trend in carbon intensity of shipping using spodumene concentrate as an example. Spodumene concentrates currently represent more than 50% of refined lithium supply worldwide (on a lithium carbonate equivalent basis), with Western Australia accounting for a significant portion of that.

Roskill estimated the variation in carbon intensity over time of shipping a 15,000t parcel of spodumene concentrate a distance of 7,000 km from Port Hedland, Australia to the port of Zhenjiang near Shanghai, China. 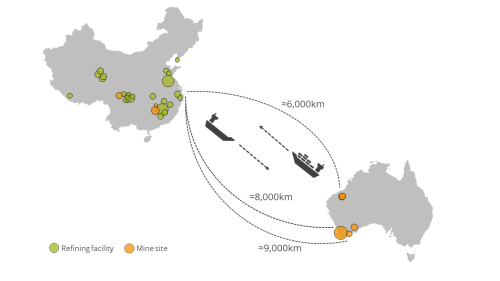 Roskill’s analysis shows that the carbon intensity will decrease over time, as the effect of increasing efficiency hurdles under the EEDI are incorporated and older, less efficient ships fall out of service. However, the estimated reduction in carbon intensity from 2008 levels by 2030 is 3.2%—at least an order of magnitude below the IMO’s ambition.

The relatively small parcel size of spodumene shipments results in a higher carbon intensity per tonne of material shipped, Roskill noted. Transporting larger cargo tonnages on larger vessels benefits from an increased economy of scale and would result in proportionally lower CO2 emissions. For example, data in the table below show how a ten-fold increase in the cargo tonnage results in a three-fold reduction in carbon dioxide intensity.

This highlights the benefits increased economies of scale would have on this part of the spodumene supply chain, Roskill said. Companies shipping mineral cargoes may wish to consider increasing the size of delivered parcels where possible, utilizing a single vessel for multiple/mixed parcels, and insisting upon freighters using newer and more efficient ships, as possibilities to reduce their carbon footprint, Roskill suggested.

Coming into effect in three 5-yearly phases from 2015, the EEDI specifies increasing hurdle levels for the reduction in CO2 emissions of new ships relative to a reference line based on average ship efficiency between 2000-10.

Lithium is extracted from lithium minerals found in spodumene (a pyroxene mineral consisting of lithium aluminum inosilicate, LiAl(SiO₃)₂) or in water with a high concentration of lithium carbonate (brine). Although originally global lithium supply was dominated by hard-rock mineral sources, in the early 1980s, large-scale lithium brine operations commenced in South America. Today, the world’s lithium production is split evenly between hard rock and brine, according to the Australian Trade and Investment Commission (Austrade), which is seeking to secure an expanded place for Australia in the lithium-ion battery value chain.

Processing spodumene deposits follows conventional hard-rock mining and processing practices. Ore is mined via drill and blast methods, then excavated and trucked to a central processing facility. The ore then undergoes multiple stages of crushing to reduce the particle size to below 6 mm. Following flotation and magnetic separation, the wet concentrate is filtered and prepared for transportation as a 6% lithium oxide (LiO2) concentrate.

Or have it processed down under, value adding, in Auz, then run 1/20 the number of ships....

You have to understand we do it differently here in Oz.

The biggest and best lithium mine in the world. the Talison mine in WA has been sold to a Chinese(state) company who see no advantage in value adding in Oz,

This is customary here. The iron ore, coal, gas,aluminium etc are all majority owned by "offshore" entities.

We have a prime minister who has a lump of coal as a pet rock.

The government has changed the rules so that gas producers can use funds set aside for alternate energy.

The government cannot agree that global warming is caused by humans.