Representing a significant milestone in the largest job in its history, Jumbo has completed the transportation element of its Transport & Installation contract for the Yunlin offshore wind farm in Taiwan.

Yunlin is a 640 MW project sited approximately 8km off the coast of Taiwan. The plant will feature 80 Siemens Gamesa 8.0-167 DD (direct drive) offshore wind turbines. Nominal power of the turbines is 8.0MW; rotor diameter is 167 meters; the swept area is 21,900 m2.

Jumbo mobilized ships from its own Heavy Lift Vessel fleet, together with subcontracted deck carriers and HLVs from third parties, to transport 40 monopiles, 120 monopile sections and 40 transition pieces (TPs) from yards in the Netherlands and Germany to Taiwan. 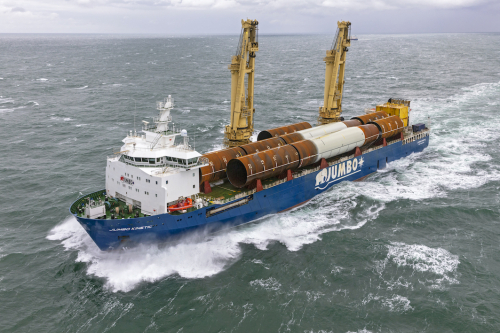 In terms of logistics, the Yunlin offshore wind farm is a substantial project; the transport of components required 21 intercontinental voyages, at times with 10 TPs per voyage.

Yunlin illustrates Jumbo’s position as a Tier I contractor for a major offshore wind farm construction project. In addition to the actual transport of components from A to B, Jumbo’s role was complete project management of numerous critical aspects of the project. This included the engineering, design and fabrication management of the supporting and sea-fastening elements such as cradles, grillages and load spreader beams, procurement of additional equipment and services, as well as the chartering of third-party vessels.

The transport of the offshore wind substructures is now completed. In the meantime, Jumbo is ready for the installation of 80 transition pieces.

Based in The Netherlands, Jumbo is a heavy-lift shipping and offshore transportation & installation contractor.