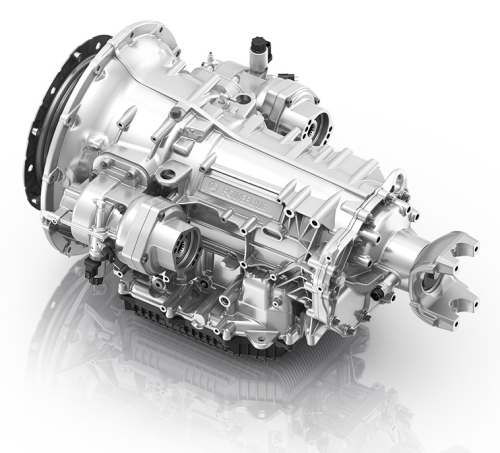 ZF Powerline is suitable for engines with up to 1200 N·m. In terms of segment-related weight, PowerLine sets few limits for manufacturers: Vehicles with a gross vehicle weight of up to 26 tons can be equipped with the transmission system.

Compared to current, comparable systems, the transmission can help to reduce fuel consumption by up to 10%. A consumption-reducing overall ratio spread of 7.64 combined with early closing of the torque converter contribute significantly to this. Furthermore, gearshifts are 30% quicker than automated transmissions. Weighing only approximately 150 kg without heat exchanger the ZF innovation sets new standards in terms of power-to-weight ratio. PTOs can also be supported.

With its modular design featuring different launch elements, PowerLine is suited for the medium-duty truck segment of up to 26 tons, buses and coaches as well as pickup trucks—particularly popular in the US. The future will also see an electric version of the transmission as a mild or plug-in hybrid.

Thanks to PowerLine’s versatile technology, we can now build on its success also in the commercial vehicle segment. Following Europe and China, our commercial vehicle transmissions are now also present in the important North American market. Orders like this contribute to generating the revenue we need to invest in future-oriented technology and the transformation of our company.

—Wilhelm Rehm, member of ZF’s Board of Management and in charge of Commercial Vehicle Technology

In October 2020, global PowerLine production started in Friedrichshafen, Germany, headquarter of ZF’s Commercial Vehicle Technology Division, where the transmission was developed. To be able to manufacture additional volumes for North American customers as of 2023, ZF relies on the know-how of its transmission plant in Gray Court, South Carolina.