AW-Energy Oy is entering the commercial hydrogen market by introducing a combined WaveRoller and HydrogenHub process for the production of green hydrogen. AW-Energy says that its wave energy device, when combined with other renewable energy sources, can enable significant green hydrogen cost reductions and is a viable solution in the drive to execute the world’s clean energy hydrogen roadmap.

The WaveRoller is a device that converts ocean wave energy to electricity. The machine operates in near-shore areas (approximately 0.3-2 km from the shore) at depths of between 8 and 20 meters. Depending on tidal conditions it is mostly or fully submerged and anchored to the seabed. A single WaveRoller unit (one panel and PTO combination) is rated at between 350kW and 1000kW, with a capacity factor of 25-50% depending on wave conditions at the project site. The technology can be deployed as single units or in farms. 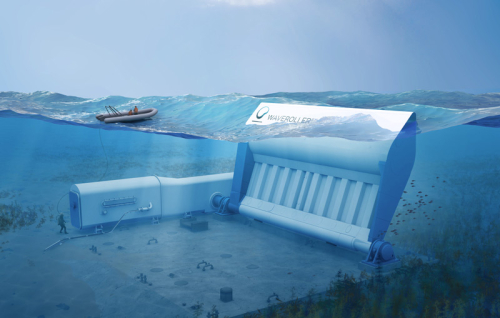 Green hydrogen is produced by using renewable energy (such as combining wave energy with solar) to power electrolysis that splits water into its constituent parts. Widely available analysis suggests a US$2/kg price represents a potential tipping point that will make green hydrogen and its derivative fuels the energy source of choice across multiple sectors, including steel manufacturing, fertilizer production, power generation, and shipping where vast near-term demand exists across Europe and internationally.

Green ammonia, a derivative of green hydrogen, is also being assessed as a way to displace fossil fuels in thermal power generation, greatly decreasing the emissions intensity of existing energy infrastructure.

We believe the collective ingenuity of our supply chain can deliver green hydrogen at less than US$2 per kilogram. From an industry, technology and political perspective, we see no barriers to achieving this. It is time for energy operators and suppliers to work together with wave energy providers to scale-up to reduce costs.

Baker McKenzie reports that the low-carbon hydrogen market size could reach $25 billion by 2030. The Hydrogen Council indicates that $70 billion—less than 5% of the annual global energy spend—from private and public sources will enable hydrogen to reach scale.

The growth in green hydrogen production using wave energy could be a cost-effective solution in reaching the world’s latest hydrogen goals, AW-Energy says. WaveRoller is the first marine energy technology to be qualified through certification by Lloyd’s Register to mitigate risks, and provide investors with confidence in the delivery of commercial wave energy technology.

This is even worse than using wind power to make hydrogen as the power is even more diffuse and the amount of capital equipment required is even greater to say nothing of the environment that it must operate in.

I find it interesting that wind energy is being built out over the oceans; but, little progress has been achieved advancing wave power...perhaps I don't understand the problems to be solved other than corrosion(ha).

bullshit slacked on itself. the point of wave energy is it's stable availability. combining this with electrolysis is nothing but bullshit

@Durson, yes, IMO, if they want to do wave, they should just bring it ashore and use it on the grid.
@Lad: it sounds great, but it isn't:
a: You are at sea so everything is expensive
b: It is a very hostile environment: Corrosion and stuff growing on it.
c: Very expensive
d: The wavelength of the waves is variable and so it is hard to make a system that resonates with all of the available wave types.
e: It has to be massively strong to handle storms, hence expensive (variable amplitude of waves)
f: It is not good for marine ecosystems so this pushes many greens away.

g: I suppose it is being overtaken by onshore and offshore wind, which looks like a better bet.
+ good article in wikipedia (as always)