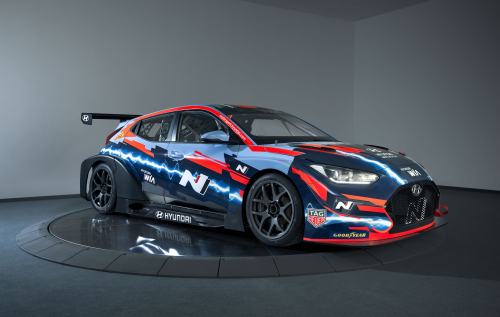 Testing on the Veloster N ETCR began with a prototype design in September 2019, which the team continued to develop throughout 2020. It is a zero-emission, rear-wheel drive touring car with mid-mounted motors and designed specifically for ETCR regulations.

Equipped with a 798-volt battery pack from Williams Advanced Engineering located in the floor of the car and a double-wishbone rear suspension, the chassis is radically different from any previous Hyundai Motorsport project.

It boasts a peak power output of 500 kW (equivalent to 680 PS) and a continuous power of 300 kW. The Veloster N ETCR features four motors—two per rear wheel—which are connected to a single gear ratio gearbox.

Hyundai Generator. PURE ETCR presents Hyundai with the opportunity to push its electrification systems to the limit under the most extreme conditions. However, while high-performance is a key tenet for the company, it is also committed to making the competition, as well as the future of motorsport and performance cars more generally, as environmentally-friendly as possible. For Hyundai, this does not stop with the zero-emission drivetrain. Rather, the whole ecosystem has to be sustainable, from power generation to fuel transport.

Hyundai will be offering its new hydrogen generator as a recharging system for electric vehicles. The Hyundai Generator is the newest feature of emission-free electric charging and consists of two fuel cell stacks.

The Hyundai Generator allows two EVs to charge simultaneously. As well as featuring a high-speed charging capability, it also offers significantly reduced noise levels compared to a diesel generator. Beyond e-racing, Hyundai is also confident its hydrogen-powered generator has a range of different potential use cases, such as festivals, construction sites and crisis situations.

Electrified motorsport is also a way for Hyundai to reach out to new target groups. By developing an emissions-free touring car like the Veloster N ETCR, the company is demonstrating the feasibility of high-performance EVs. These models can be eco-friendly, while at the same time being fun to drive.

Hyundai in motorsport. For Hyundai, motorsport is a field in which the company can experiment with new technologies, which can then inform the development of its production cars. Knowledge transfer between Hyundai Motorsport and the Hyundai N brand has proved fruitful so far, with success in both the WRC and TCR championships as well as well-received road cars like the all-new i20 N.

After a successful foray into WRC, Hyundai Motorsport entered the world of circuit racing in 2018 with the i30 N TCR. Gabriele Tarquini took the car to the top of the inaugural WTCR standings in 2018. A year later, Norbert Michelisz powered the i30 N TCR to its second consecutive championship.

Hyundai Motorsport competes in the WRC with the i20 Coupe WRC, which is based on a highly-modified version of the Hyundai i20. In the WTCR, the team races with the i30 N TCR. This dedicated touring car is based on the company’s first high-performance production model, the i30 N. Both cars demonstrate how Hyundai’s road-going models serve as an optimal basis for Hyundai Motorsport’s competitive racing cars.

The i20 Coupe WRC is equipped with a 1.6-liter turbocharged engine with direct injection, which is connected to a six-speed sequential transmission. It offers four-wheel drive and provides a maximum output of 380 PS, with 450 N·m of torque. Hyundai Motorsport is currently developing a mild hybrid powertrain for the i20 WRC. This is scheduled to launch in 2022, and it is set to be the world’s first rally car with such technology.

The i30 N TCR is powered by a two-liter turbocharged 4-cylinder inline engine, which is connected to a six-speed sequential gearbox. It features front-wheel drive and is fitted with a 100-liter fuel tank. It provides a maximum output of 350 PS with 450 N·m of torque.