Boston Metal, an MIT spin-off working to commercialize molten oxide electrolysis (MOE) for emissions-free metals and alloys production, announced that Vale and Energy Impact Partners have joined its Series B fundraising, closely following a $50M close announced in January. MOE is an electrometallurgical technique that enables the direct production of metal in the liquid state from oxide feedstock.

Headquartered in Rio de Janeiro, Brazil and present on five continents, Vale is one of the largest metals and mining companies in the world based on market capitalization and one of the world’s largest producers of iron ore and nickel. It also produces iron ore pellets, manganese ore, ferroalloys, metallurgical and thermal coal, copper, platinum group metals (PGMs), gold, silver and cobalt.

Boston Metal’s mission is to deliver emissions-free steel at global scal. Iron ore and clean electricity are the primary inputs into the MOE process and will heavily influence the design of our technology and our strategy. We are thrilled to add Vale and BHP, two of the largest iron ore companies, and Energy Impact Partners, a leading energy transition investor, to our world-class syndicate of investors and partners.

The Series B will allow Boston Metal to validate its patented inert anode technology at industrial-scale, further expand its team, and deploy its molten oxide electrolysis (MOE) process with customers, starting with high-value ferroalloy production as it advances toward steel applications. 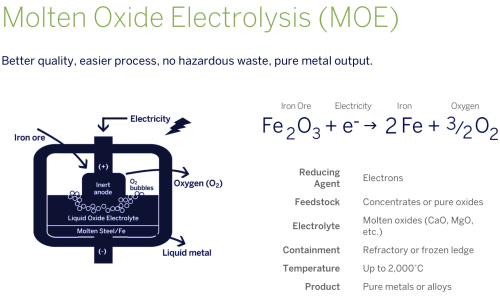 Background. With support from NASA, the American Iron and Steel Institute, and the Deshpande Center at MIT, MIT Professor Donald R. Sadoway’s laboratory demonstrated that molten oxide electrolysis (MOE) could reliably and efficiently produce a broad platform of metals at the laboratory-scale.

To commercialize these innovations, Professor Antoine Allanore, Dr. Jim Yurko and Donald R. Sadoway founded Boston Electrometallurgical Corporation in 2012. In a 2013 paper in the journal Nature, Antoine Allanore, Lan Yin, and Donald R. Sadoway demonstrated that MOE could produce emissions-free steel with the publication of laboratory results using a cost-effective inert anode. (Earlier post.) In that same year, Ingo Wender was the first investor to fund the company and operations moved into offices in Woburn, Massachusetts. The first semi-industrial MOE cell was commissioned shortly thereafter in 2014.

With additional funding from the DoD Defense Logistics Agency, Department of Energy, and National Science Foundation the company, now known as Boston Metal, has continued to innovate and is now bringing the MOE technology to market for ferro-alloys, steel, and a variety of other metals.

Boston Metal has produced more than 1,000 kg of metal alloys since commissioning its first reactor. Boston Metal has efficiently increased the operating temperature for electrolysis enabling the technology to address high-melting-temperature metals.

A really interesting technology and apparently it is financially viable or they would not be getting the investments they have received. The energy cost would be more but their web site suggests that the capital cost is considerably less. The quality of the iron should be considerably higher than blast furnace iron which eliminate several steps in the production of steel. Also, I would guess that the energy cost would be less than that required to do direct reduction with hydrogen as you use the electric power directly.

CEO of Boston Metal has spelled out his future plans regarding his company. He has decided to bring revolution into his company to generate more revenue in the future. He is a great man who is giving Jobs to the new graduate and supporting new talent as well. I will click here for more info to check the price of translation service because I want to get this article translated into another language to tell foreigners about new technology.