Researchers at Uppsala University have developed photocatalytic composite polymer nanoparticles (“polymer dots”) that show promising performance and stability for the production of hydrogen from water and sunlight. An open-access paper on the work appears in the Journal of the American Chemical Society.

These polymer dots are designed to be both environmentally friendly and cost-effective.

Since polymer dots (Pdots) are so tiny, they are evenly distributed in water. Compared with traditional photocatalysts, this provides a larger reaction surface, which means that more light can be stored in the form of hydrogen gas. The research group has now developed a Pdot containing three components. In tests, the particle has shown very good catalytic performance and stability. 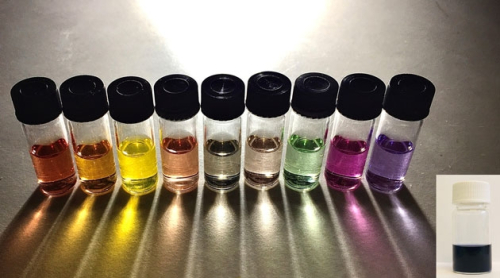 Panchromatic ternary polymer dots (Pdots) consisting of two conjugated polymers (PFBT and PFODTBT) based on fluorene and benzothiadiazole groups, and one small molecular acceptor (ITIC) have been prepared and assessed for photocatalytic hydrogen production with the assistance of a Pt cocatalyst. Femtosecond transient absorption spectroscopic studies of the ternary Pdots have revealed both energy and charge transfer processes that occur on the time scale of sub-picosecond between the different components. They result in photogenerated electrons being located mainly at ITIC, which acts as both electron and energy acceptor.

Results from cryo-transmission electron microscopy suggest that ITIC forms crystalline phases in the ternary Pdots, facilitating electron transfer from ITIC to the Pt cocatalyst and promoting the final photocatalytic reaction yield. Enhanced light absorption, efficient charge separation, and the ideal morphology of the ternary Pdots have rendered an external quantum efficiency up to 7% at 600 nm. Moreover, the system has shown a high stability over 120 h without obvious degradation of the photocatalysts.

To investigate how well the various components work together, Haining Tian, Associate Professor (Docent) of Physical Chemistry at Uppsala University and his colleagues used spectroscopic techniques in which the Pdot was exposed to light for a certain length of time. They were thus able to follow how photochemical intermediates were created and, under illumination, disappeared.

The achieved 7% efficiency rate at 600 nanometres (nm) is significantly better than the 0.3% at 600 nm obtained by the group when they were working on Pdots consisting of only one component. One problem has previously been that the photocatalysts degrade prematurely, but now the researchers were unable to discern any distinct degradation even after 120 hours’ testing.