TECO 2030 (earlier post) is aiming to establish Norway’s first large-scale production of fuel cells, optimized to be the heart of hydrogen-powered ships and other heavy-duty installations.

Our ambition is to build an advanced innovation center combined with a giga factory, meaning that we will produce fuel cells with a capacity of 1200 megawatts, or 1.2 gigawatt, per year. This corresponds to several hundred million euros in annual turnover. This will be the first volume production of fuel cells in Norway and a hub for the Norwegian hydrogen industry.

We are optimizing fuel cells from the bottom up for heavy-duty marine use. We combine a best-in-class fuel cell solution with a long history of being a trusted engineering partner to leading companies in the global maritime industry. 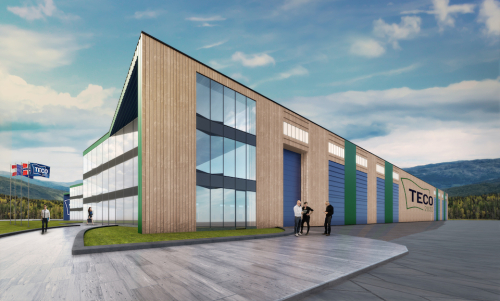 Fuel cell development is done in collaboration with Austrian engineering company AVL, the world’s largest independent company for development of powertrain systems. AVL will also contribute to the planning and construction of the factory.

TECO 2030 plans to deliver a marine hydrogen solution that is more efficient, compact and durable than fuel cells based on modified automotive stacks. The partnership with AVL has already resulted in bringing to production the TECO Future Funnel, a complete exhaust gas cleaning system. The plan is to start fuel cell production in 2022.

In addition to AVL, TECO 2030 has already established partnerships with high-quality industrial players such as the main Austrian electricity company Verbund, the large Dutch inland shipping company Chemgas, and the seventh-generation innovative Dutch shipyard Thecla Bodewes. TECO 2030 will continue forging such partnership as a platform for the energy transition in the marine industry.

TECO 2030 primarily wants to establish the fuel cell gigafactory in Eastern Norway, probably in Viken, Vestfold or Telemark counties. The company is assessing potential locations. An important factor will be proximity to competence clusters within technology and shipping. The gigafactory may create 500 jobs within research and development, pilot production and full-scale industrial production.

Expected investment is nearly €100 million over approximately ten years. Financing alternatives are being evaluated. TECO 2030 has, through the Norwegian state enterprise Enova, applied for support under the IPCEI Hydrogen program and is optimistic regarding a positive response.

TECO 2030 originates from the TECO Maritime Group, which has provided technology and service to the global shipping industry for more than 25 years. TECO 2030 was listed on Euronext Growth Oslo in the fall of 2020.

TECO 2030 focuses on one of the biggest environmental challenges of our time: How to combine ever-increasing shipping volumes with reduced emissions? The company’s vision is emission-free shipping, with hydrogen-based fuel cells in a leading role. The company also provides optimal emission reduction for traditional fuel vessels. The TECO 2030 Marine Fuel Cell System is based on a modular design, enabling system configuration in the multi-megawatt scale. It is compact and suitable for retrofits as well as newbuilds.

TECO 2030 is a partner in the project Green Hydrogen @ Blue Danube, together with players such as Siemens, Bosch, AVL and Verbund, where hydrogen generated from solar and wind power will be produced in Romania and transported on barges along the Danube to industrial buyers in Austria and Germany. TECO 2030 will supply fuel cells for hydrogen-powered tugboats pushing the barges along the Danube.

The trend towards reduced maritime emissions is accelerated by upcoming global emission legislations. IMO, the International Maritime Organization, targets carbon emission cuts of 40% by 2030 and 70% by 2050, compared to 2008 values. Total greenhouse gas emissions are to be reduced by at least 50% by 2050. Additionally, for rivers and waterways, zero and low emission zones are being proposed to reduce emissions to river cities.