IDTechEx: Sales of electric motorcycles in Europe grew 50% y-o-y in 2020

IDTechEx expects electric motorcycle sales in Europe to have grown at least 50% year-on-year in 2020, building on the momentum of recent years. (Although steep, the 50% growth is half that experienced in 2019 from the year before.) This growth is driven by continued policy support from governments alongside start-ups and incumbent OEMs entering the market with new model releases, finds the recent report from IDTechEx, “Electric Two-wheelers 2021-2041”. Growth is also being boosted by consumer awareness and acceptance in Europe of the benefits of electric motorcycles. Besides the low cost of ownership, electric motorcycles improve the riding experience, taking away the noise, fumes, vibration, shifting, and clutching from the user experience, alongside the environmental benefits of low emissions. The result has been strong growth on par with the electric car market since 2017, as shown in the chart below. 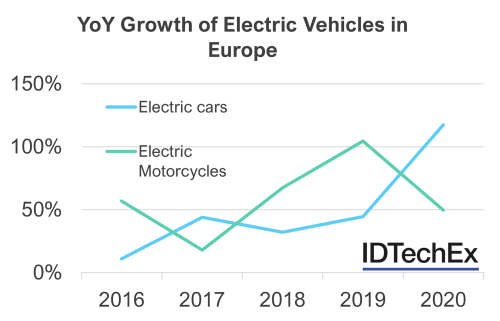 Electric motorcycles typically utilize electric motors beyond 40 kW—more comparable to those found in electric cars than electric scooters, in a much more restricted space. This high-power need, coupled with the limited space on the motorcycle, means manufacturers rarely use off-the-shelf parts and design motors in-house from scratch.

The situation is the same for the battery packs, which actually take up the most space in boxy designs unconventional for the moto industry (even when utilizing high-energy automotive-grade Li-ion cells). In contrast, low energy, cheap LFP packs sourced from China can be used for the low energy needs of electric scooters.

Zero Motorcycles, the global market leader for electric motorcycles based out of California, is a good example, according to IDTechEx. It uses locally sourced NMC pouch cells in a custom pack and has an impressive custom-built permanent magnet AC motor (passively air-cooled). The motor has no transmission and is direct drive to the rear wheel, with instant torque.

The result is that electric motorcycles are expensive compared with equivalent combustion models, and start-ups often focus on developing competition or racing bikes, which are less price-sensitive markets. So, while the market is growing, the price remains the main hurdle: a motorcycle with a 14 kWh battery pack sells for more than $15,000 today.

The issue is exacerbated by the fact that electric motorcycles have the most appeal to environmentally conscious millennials who tend to have less purchasing power than older generations preferring loud pipes. Indeed, notes IDTechEx, young people are less inclined to buy a motorcycle in general, which is an existential problem with which the overall industry is grappling. The high price of electric motorcycles should naturally improve as battery costs continue to decline from the economies of scale of the automotive industry, which may be enough to entice a new, younger audience.