A research team from Japan has recently developed a novel electrode material for all-solid-state batteries (ASSBs) by combining lithium sulfate and lithium ruthenate, which results in improved performance. An open-access paper on their work is published in Science Advances.

An all-solid-state lithium battery using inorganic solid electrolytes requires safety assurance and improved energy density, both of which are issues in large-scale applications of lithium-ion batteries. Utilization of high-capacity lithium-excess electrode materials is effective for the further increase in energy density. However, they have never been applied to all-solid-state batteries. 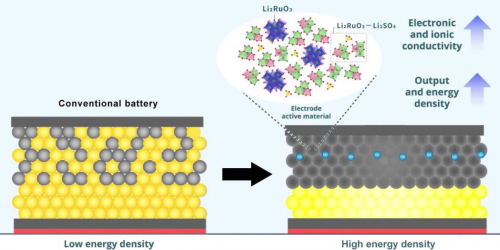 The invention of commercial lithium-ion batteries (LIBs) in the 1990s marked a turning point in the technological revolution. These lightweight, rechargeable batteries power most of the electronic devices we use today, from pacemakers to electric vehicles. However, with their ever-increasing popularity emerged two major problems. The first has to do with safety: if not manufactured with the highest standards, LIBs can malfunction. Secondly, because lithium is typically found in low concentrations in the Earth’s crust, our “addiction” to modern technologies is—slowly but surely—depleting current reserves of the metal.

Scientists are thus looking at various alternatives to make batteries safer and more sustainable in the long run. At the Osaka Prefecture University, Associate Professor Atsushi Sakuda, Dr. Kenji Nagao, and their colleagues at the Department of Applied Chemistry have been studying all-solid-state batteries (ASSBs).

The main difference between ASSBs and conventional LIBs is that the former uses a solid electrolyte instead of a liquid one. The liquid electrolyte in LIBs is highly flammable and also tends to have a lower conductivity; it also prone to leakage and is thus all the more dangerous. Swapping this with a more stable solid electrolyte could solve the battery’s safety and performance issues. The non-flammable nature of solid electrolytes makes ASSBs extremely safe. It is also possible to “miniaturize” these cells, as they do not require separators or cooling systems.

However, one obstacle remains: it is difficult to achieve effective contact between the electrolyte and the electrode active material, and this decreases the energy density and the battery’s performance.

To solve the problem mentioned above, the researchers looked at the electrode’s composition. The active material in the electrode is what allows the battery to function: by losing or gaining electrons through redox (reduction–oxidation) reactions, the material enables charge transfers between the electrode and the electrolyte. The more redox reactions occur, the more charge is stored in the battery, and the more energy density it has.

Based on this knowledge, the researchers developed a positive electrode material by combining two lithium compounds: lithium sulfate (Li2SO4) and lithium ruthenate (Li2RuO3). The resulting matrix provided more space for ions to flow through, enabling a faster transfer of charge. The addition of Li2SO4 also made the overall structure more ductile and amorphous, which enables a reversible redox reaction and allows for the matrix to be further compressed to increase electronic and ionic conductivity and—thus—stability.

With a reversible capacity of 270 mAh/g, these new cells outperform most previous ASSBs. The researchers want to go further still by swapping out the expensive ruthenium (Ru) element in the electrode with another, cheaper metal with similar properties. That being said, they believe that their method provides a solid basis for the manufacture of next-generation batteries.

The researchers hope to be able to demonstrate the operational safety of ASSBs in electric vehicles. In doing so, they expect that ASSBs will become the prime candidate for next-generation batteries.