California’s current strategy of recovering a myriad of fixed costs in electricity usage rates must change as the state uses more renewable electricity to power buildings and vehicles, according to the findings from a new report from the Energy Institute at the UC Berkeley Haas School of Business and non-profit think tank Next 10.

Data from Designing Electricity Rates for An Equitable Energy Transition reveal that the state’s three largest investor-owned utilities (IOUs) charge residential electricity customers much higher prices than are paid in most of the country—prices that are two to three times higher than the actual cost to produce and distribute the electricity provided.

These high prices result from uncommonly large fixed costs that are bundled into kilowatt-hour prices and passed on to customers. These costs cover much of the generation, transmission and distribution fixed costs, as well as energy efficiency programs, subsidies for houses with rooftop solar and low-income customers, and increasing wildfire mitigation costs.

Overall average residential rates, including those on low-income rates (CARE). In 2019, more than a quarter of California IOU customers were enrolled in the CARE program. When CARE customers are removed, average rates for non-CARE households are about 10% higher. Source: Designing Electricity Rates for An Equitable Energy Transition

What Californians pay is much higher than the true marginal cost of using electricity. This puts an unnecessary cost burden on low- and middle-income households as we transition to using clean electricity.

Compounding concerns over these high costs is the inequity of their distribution: as wealthier households transition to rooftop solar, the fixed costs are distributed through a smaller volume of kilowatt-hours delivered, raising the costs even more for remaining, lower-income customers.

Lower- and middle-income households are bearing a far greater cost burden for the state's power system than seems fair. We’re proposing solutions that would recover system costs through sales or income taxes, or an income-based fixed charge, which would pay for long-term capital costs while ensuring all those who use the system—and specifically, wealthier households—contribute equitably. 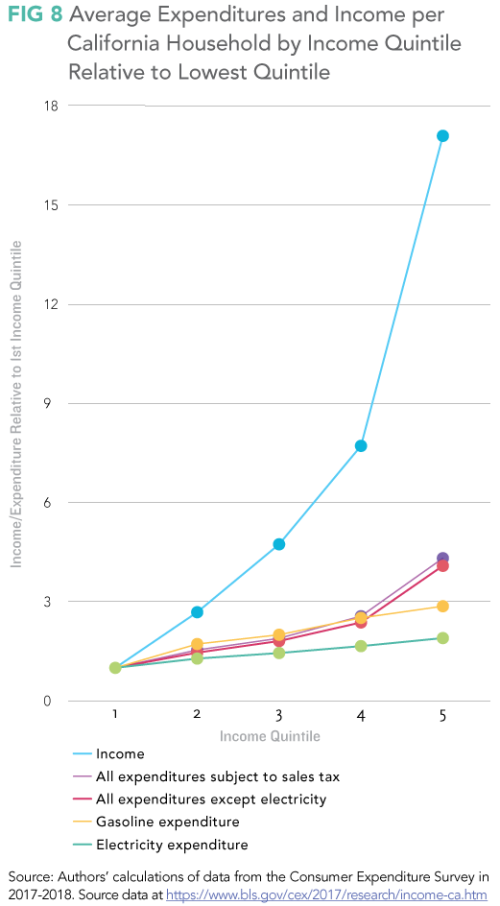 The report comes as an increasing number of Californians are struggling to pay their utility bills. About eight million residents currently owe money to investor-owned utilities, according to a recent presentation by the California Public Utility Commission. This is especially concerning as rates are projected to rise again due to wildfire-related costs.

Earlier this month, IOUs unveiled a plan to spend $15 billion over the next two years to prevent wildfire ignitions. The researchers found that while wildfire prevention programs are likely to be a major driver of price increases in the near future, there is a significant lack of transparent data on the total costs and how they are being passed on.

Key findings from the report include:

The report suggests potential changes to how utility fixed costs, as well as and environmental and low-income program costs, are recovered, including:

We believe policymakers could consider pursuing an income-based fixed charge based on three criteria. Set prices as close to cost as possible; recover the full system cost; and distribute the burden of cost recovery fairly.

Borenstein is presenting the report’s findings to the Public Utilities Commission today at an En Banc hearing on energy rates and costs in California. The En Banc centers around themes and concepts raised by a CPUC-authored white paper on California electric and gas cost and rate trends over the next decade.

The need to improve the safety and reliability of the electric system while meeting California’s climate goals and various statutory mandates will require careful management of rate and bill impacts to ensure that electric services remain affordable. As California continues transitioning to a more robust distributed energy resources marketplace with greater deployment of electric vehicles, it will be essential to employ aggressive actions to minimize growth in utility rate base and to protect lower-income ratepayers from cost shifts and bill impacts. This white paper explores the affordability of the grid of the future and is intended to stimulate discussion of potential solutions that will be necessary to ease this transition, particularly for California’s most vulnerable customers.