A report from the State Auditor of California finds that California may not successfully meet its upcoming greenhouse gas (GHG) reduction goal of 40% by 2030, which will require the State to reduce GHG emissions by nearly 40% over the next decade. 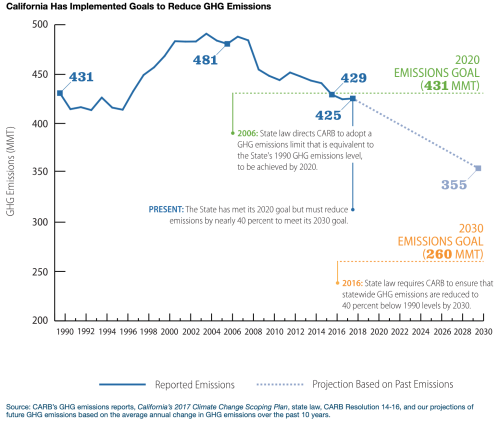 The Joint Legislative Audit Committee directed the office of the State Auditor to conduct an audit of the California Air Resources Board (CARB). The assessment focused on transportation programs intended to reduce greenhouse gas (GHG) emissions. In general, as detailed in the report, the Auditor determined that CARB must do more to help the State work strategically toward its climate change goals.

CARB has not done enough to measure the GHG emissions reductions its individual transportation programs achieve. Specifically, CARB has not collected or evaluated sufficient data to allow it to determine whether or how its incentive programs, which pay consumers in exchange for purchasing low- and zero-emission vehicles, reduce GHG emissions beyond what CARB’s regulations already require. For example, CARB has done little to measure the extent to which its incentive programs lead to emissions reductions by causing individuals and businesses to acquire clean vehicles that they otherwise would not.

As a result, CARB has overstated the GHG emissions reductions its incentive programs have achieved, although it is unclear by how much. Given the ambitious nature of the State’s climate change goals and the short time frame to meet them, California is in need of more reliable tools with which to make funding decisions.

Additionally, CARB has not consistently collected or analyzed data to determine whether some of its programs provide the socioeconomic benefits that CARB has identified for those programs, such as maximizing participants’ economic opportunities.

Because these programs may cost significantly more than other incentive programs from the perspective of reducing GHG emissions, CARB must do more to measure and demonstrate specific benefits to disadvantaged communities and low-income communities and households that the programs intend to serve.

Finally, despite requirements in state law and its own guidelines, CARB has been slow to measure the jobs its programs create and support—or the benefits of the specialized job training that certain programs are supposed to provide. As with the need to assess accurately programs’ GHG reductions, knowing whether its programs are achieving the expected important but more expensive socioeconomic benefits is crucial to providing the State with the information it needs to allocate its limited resources effectively in pursuit of its various goals.

Cap-and-trade revenue unpredictable. California’s cap‑and‑trade program raises revenue by setting statewide limits on GHG emissions from major sources. Entities responsible for those sources can either reduce their emissions or pay the State for allowances. The payments take place during quarterly auctions of GHG allowances, which have generated billions of dollars in annual revenue that the State then deposits in the cap‑and‑trade fund.

The Auditor’s report notes that although substantial, cap‑and‑trade revenue is finite and can be unpredictable. Partly as a result of the ongoing COVID‑19 pandemic, the cap‑and‑trade auction in May 2020 generated quarterly proceeds of only $25 million, compared to an average of more than $700 million for each of the previous 11 quarters.

This drop in revenue caused a funding reduction of $81 million to CARB’s programs for the year. Although the auction has rebounded somewhat since then, proceeds remain below the historical average. This uncertainty, together with the short time frame remaining before the 2030 date for achieving the State’s GHG goals, increases the challenge of meeting those GHG goals, the report observed.

CARB implements these programs—sometimes at the direction of the Legislature—and reviews the programs’ funding each year. (E.g., earlier post.)

Regulatory and incentive programs may work toward the same objective—ZEV adoption, for example. The ZEV regulation requires that auto manufacturers sell enough ZEVs each year to make up a required proportion of their overall sales. CARB also operates incentive programs that provide rebates or other financial support to consumers who purchase ZEVs. The intent of these rebates is to encourage customers to purchase ZEVs, which tend to be more expensive than gasoline‑powered vehicles.

All of these programs work simultaneously toward achieving CARB’s objective of putting five million ZEVs on California roads by 2030. Given the ambitious nature of the State’s GHG goals, it may be reasonable for CARB to operate multiple programs that work toward a shared transportation objective. However, to ensure that it is operating the most effective mix of programs to achieve the State’s goals, it is important for CARB to identify the GHG reductions that each individual program achieves.

Specific issues within the regulatory/incentive overlap include:

One effect of this overstatement is to obscure the programs’ cost‑effectiveness in reducing GHG emissions. … Specifically, if the annual reports contained accurate information, these reports could better help the Legislature make decisions about whether to continue funding a given program at its current level, decrease the funding and use those resources elsewhere, or significantly increase funding. Further, improved and clear metrics will help CARB to know when its incentive programs have successfully achieved their goals of helping low‑ and zero‑emission vehicle technology become sustainable. As part of strengthening its program measurement overall, CARB must also do more to ensure that the data it collects on those programs are accurate and that the calculations CARB makes from the data are free of errors that can further distort the emissions reductions it reports.

Although CARB has exceeded these minimum spending requirements in recent years, it has done relatively little to measure the specific socioeconomic benefits of its programs, the report found.

CARB has also been slow to measure the jobs its programs create or support, and has done little to measure the benefits of the job‑training activities that its own guidelines require, the report found.

According to the Auditor, CARB agreed with the recommendations and indicated that it is taking steps to implement them.