CWind, a leading provider of project services, crew transfer vessels (CTVs) and GWO-accredited training courses to the offshore wind industry, and part of the Global Marine Group (a market leader in offshore engineering), has delivered the world’s first hybrid-powered Surface Effect Ship (SES), the CWind Pioneer. A surface effect ship features both an air cushion—like a hovercraft— and twin hulls. 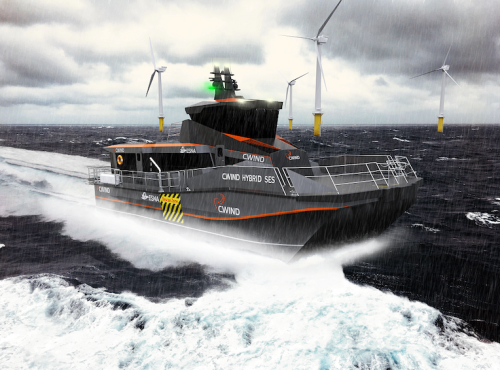 The vessel was developed in response to an industry-wide push to develop and deploy innovative technologies that reduce CO2 emissions, while cost-effectively servicing windfarms located further offshore. The CWind Pioneer achieves this through a hybrid diesel and battery electric power system which enables the vessel to operate purely on battery power while in harbor or at standby in the windfarm, resulting in a decrease in fuel burn and CO2.

With surface effect hull form and heave compensation technology, the CWind Pioneer can operate at speeds exceeding 43.5 kts, and can transit and transfer safely in sea states in excess of 1.8m Hs (significant wave height), while minimizing motion and acceleration through its air cushion motion control system, resulting in a smoother, more comfortable CTV experience for technicians and crew.

The overall design and build, with 24 passenger capacity, pays particular attention to technician and crew health, safety and comfort, delivering the workforce in the best possible work-ready condition, resulting in increased operation days offshore for O&M and construction activities.

At a speed of 43.5 kts, the Pioneer is more than 20% more fuel efficient than conventional CTVs running at 24 kts on a mile-for-mile basis. For a typical windfarm situated 30 nmi from port, this translates to a reduction of more than 110 tonnes of CO2 per vessel, per year, by using the hybrid SES.

This figure excludes the savings of the hybrid system, which will allow the vessel to be zero emission ship infield while technicians are carrying out their work on the turbines. Specific figures will be shared once these savings are proven, but initial desk top studies suggest a 30%-50% saving over conventional vessels.

The high transit speed of the vessel also means windfarms previously serviceable only by an expensive SOV, can now be reached by the SES CTV within 60 minutes, giving wind farm owners and operators more low-cost, low-carbon options when determining their transfer strategy.

The CWind Pioneer will be used at the Borssele 1 and 2 offshore wind farms through a long-term charter contract agreement with Ørsted. Using the CWind Pioneer enables Ørsted to not only deliver and service their windfarms efficiently through reduced transit times, but also supports their ambition of a world that runs entirely on green energy.

We are delighted to see the launch of the CWind Pioneer. She is not only a step-change for the offshore wind industry, but also for the SES design, as she is the first SES with 100% electric air cushion systems, which were both fun and challenging to achieve.

As a SES, she is reducing emissions by offering low resistance at high speed, and the air cushion motion damping is allowing offshore operations in same wave heights as larger vessels. By choosing a SES you can, therefore, reduce emissions by simply building a smaller vessel for the same job.

The Hybrid SES propulsion engine delivers sprint speed and extreme bollard push, from its 1,600 kW installed diesel engines, which can be battery boosted up to 1,800 kW.

This technology should be adapted to ferries. Several all electric versions of this running between ports could replace one large ferry meaning shorter waits and lower overall costs.