Solaris Urbino 15 electric bus being tested by operators in Norway

The Solaris Urbino 15 LE electric bus, i. e. the newest vehicle in Solaris’s zero-emission portfolio, is currently being tested by carriers in various Norwegian towns and cities. The bus, unveiled in October last year, will be shown off to both drivers and passengers. The tests in Norway are to be completed by the end of March. 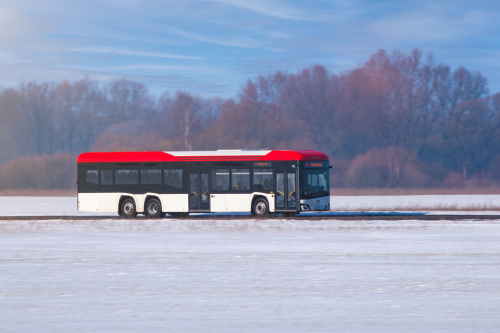 The low-entry 15-meter vehicle is the first electric bus made by Solaris to be designed both for city and intercity routes. Operators interested in the vehicle will be able to familiarize themselves with the range of technical solutions and other features and amenities deployed in it. The tests in Norway are to be completed by the end of March.

The bus will be demonstrated to carriers from Oslo and its surrounding areas. Next, the qualities of the vehicle will be explored by the residents of the city of Kristiansand. As for the recharging of batteries, the Urbino 15 LE electric bus will use the infrastructure already existing in the towns and cities in question: pantograph and plug-in charging stations available both in depots and on routes.

An important part of the trials will be testing the buses while operating on lines, with the participation of drivers and passengers. Solaris will be thus able to gather direct feedback from target groups that are actual bus users. The drivers who will test the Urbino 15 LE electric drive buses in their everyday work on long, suburban routes.

The first two Solaris Urbino 15 LE electric units were made mainly with Scandinavian operators in mind. The bus that is being demonstrated features special solutions compliant with Busnordic norms and the Scandinavian package. Bearing in mind the tough climate conditions, the designers have made sure that both thermal, and travel, comfort are ensured during rides. Vehicles of this type may boast other features that facilitate their operation in difficult conditions—for example, extra high beams, a sanding system, or a compartment for snow chains.