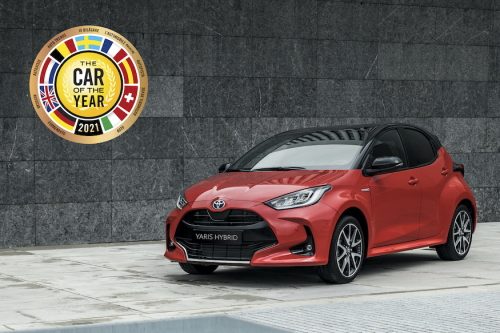 The Yaris has also consistently been recognized by the Car of the Year jury with every generation of the model making the award’s shortlist.

The jury praised Yaris’ hybrid technology for its smooth driving, low emissions and accessible price point—illustrating why more than 80% of Yaris buyers choose the hybrid powertrain.

The new Yaris is the first application of the Toyota New Global Architecture (TNGA) philosophy to a small car, and introduces the modular GA-B platform that will underpin a series of new models. The GA-B platform is central to the Yaris’ improved dynamic performance, giving a lower center of gravity and much greater body rigidity. It also enabled the designers to create a more distinctive and powerful-looking car with an appealing and individual identity.

The new model uses the latest evolution of Toyota’s fourth-generation hybrid electric powertrain. Overall efficiency increased by 20%, which typically would be at the cost of performance. However, power is 16% higher at 116 DIN hp (total system output), with a 15% improvement in 0-100 km/h acceleration, to 9.7 seconds, and sharper response to the driver’s use of accelerator.

The car’s all-electric EV capabilities have been transformed: speeds of up to 130 km/h can be reached and EV driving is possible for longer periods in urban traffic. CO2 emissions have dropped to 85 g/km and the WLTP combined cycle fuel economy figure is 3.7 l/100km (63.5 mpg US), a 20% improvement.

Furthermore, the European Car of the Year jury particularly appreciated Toyota’s success in re-igniting passion for the hot hatch market across Europe with the launch of the GR Yaris.

The 2021 European Car of the Year award comes just a few days after the new Yaris was named as the best-selling car in Europe for the first time.

Toyota has been awarded with European Car of the Year three times. Yaris won in 2000, Prius took top honours in 2005 and now Yaris has lifted the trophy again in 2021.