The researchers used a depth-cycling approach—i.e., physically moving the macroalgae between deep nutrient-rich water at night and shallow depths within the photic zone during the day to optimize growth. An open-access paper on their work appears in the journal Renewable and Sustainable Energy Reviews.

This study tested the effects of depth-cycling on the growth, morphology, and chemical composition of the giant kelp Macrocystis pyrifera, a target species for renewable biomass production. Giant kelp grown under depth-cycling conditions had an average growth rate of 5% per day and produced four times more biomass (wet weight) than individuals grown in a kelp bed without depth-cycling.

Analysis of tissue from the depth-cycled kelp showed elevated levels of protein, lower C:N ratios, and distinct δ15N and δ13C values suggesting that the depth-cycled kelp were not nitrogen-deficient and assimilated nutrients from deep water. Depth-cycled kelp also exhibited smaller and thicker-walled pneumatocysts and larger blades. Overall, this study supports further investigation of depth-cycling as a macroalgal farming strategy.

The team’s newly published findings suggest it may be possible to use the open ocean to grow kelp crops for low-carbon biofuel similar to how land is used to harvest fuel feedstocks such as corn and sugarcane—and with potentially fewer adverse environmental impacts.

The National Research Council has indicated that generating biofuels from feedstocks such as corn and soybeans can increase water pollution. Farmers use pesticides and fertilizers on the crops that can end up polluting streams, rivers and lakes. Despite those well-evidenced drawbacks, 7% of the US’ transportation fuel still comes from major food crops, nearly all of it being corn-based ethanol.

Forging new pathways to make biofuel requires proving that new methods and feedstocks work. This experiment on the Southern California coast is an important step because it demonstrates kelp can be managed to maximize growth.

Kim is associate director of special projects at the USC Wrigley Institute and a professor of environmental studies at the USC Dornsife College of Letters, Arts and Sciences.

If it lives up to its potential, kelp is a more attractive option than the usual biofuel crops for two very important reasons. First, ocean crops do not compete for fresh water, agricultural land or artificial fertilizers. And second, ocean farming does not threaten important habitats when marginal land is brought into cultivation.

The giant kelp Macrocystis pyrifera forms majestic underwater forests along the California coast and elsewhere and washes onto beaches in dense mats. Kelp is one of nature's fastest-growing plants and its life cycle is well understood, making it amenable to cultivation.

However, farming kelp requires overcoming a few obstacles. To thrive, kelp has to be anchored to a substrate and only grows in sun-soaked waters to about 60 feet deep. But in open oceans, the sunlit surface layer lacks nutrients available in deeper water.

Marine BioEnergy invented the concept of depth-cycling the kelp, and USC Wrigley scientists conducted the biological and oceanographic trial.

The kelp elevator consists of fiberglass tubes and stainless-steel cables that support the kelp in the open ocean. Juvenile kelp is affixed to a horizontal beam, and the entire structure is raised and lowered in the water column using an automated winch.

Beginning in 2019, research divers collected kelp from the wild, affixed it to the kelp elevator and then deployed it off the northwest shore of Catalina Island, near Wrigley’s marine field station. Every day for about 100 days, the elevator would raise the kelp to near the surface during the day so it could soak up sunlight, then lower it to about 260 feet at night so it could absorb nitrate and phosphate in the deeper water. The researchers continually checked water conditions and temperature while comparing their kelp to control groups raised in natural conditions. 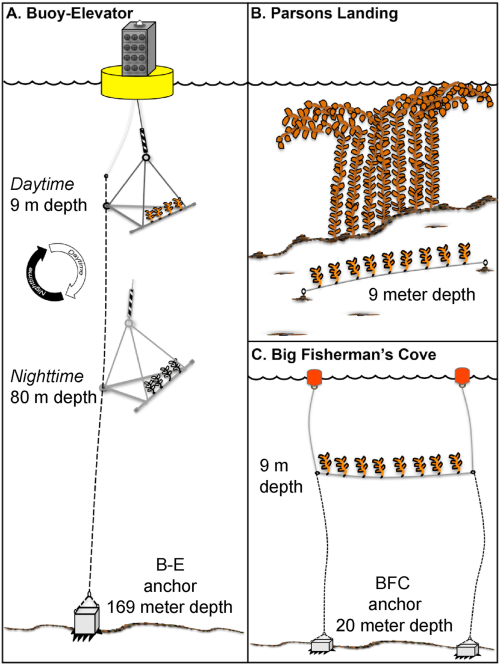 Experimental sites. (A) The Buoy-Elevator (BE) experimental platform depth-cycled kelp between 9 m during the day and 80 m at night. (B) Parsons Landing (PL) was the site of collection for all the kelp used in the trial and also used as a reference for growth of kelp in its natural setting. Experimental kelp were outplanted at the edge of a naturally occurring kelp bed. (C) Kelp were outplanted along a polypropylene rope that was suspended at 9 m in the water column at Big Fisherman’s Cove (BFC), mimicking established near-shore farming practices. Ginsburg et al.

Prior to the experiment, it was unclear whether kelp could effectively absorb the nutrients in the deep, cold and dark environment. Nitrate is a big limiting factor for plants and algae, but the study suggests that the kelp found all it needed to thrive when lowered into deep water at night. Equally important, the kelp was able to withstand the greater underwater pressure.

The good news is the farm system can be assembled from off-the-shelf products without new technology. Once implemented, depth-cycling farms could lead to a new way to produce affordable, carbon-neutral fuel year-round.

Cindy Wilcox, co-founder and president of Marine BioEnergy, estimates that it would take a Utah-sized patch of ocean to make enough kelp biofuel to replace 10% of the liquid petroleum consumed annually in the United States. One Utah would take up only 0.13% of the total Pacific Ocean.

The US Department of Energy’s Advanced Research Projects Agency-Energy invested $22 million in efforts to increase marine feedstocks for biofuel production, including $2 million to conduct the kelp elevator study. The Department of Energy has a study to locate a billion tons of feedstock per year for biofuels; Cindy Wilcox said the ocean between California, Hawaii and Alaska could contribute to that goal.

The research was supported by ARPA-E, US Department of Energy Award Number DE-AR0000689 and by Marine BioEnergy, Inc., which has a commercial interest in the research and contributed part of its $2.6-million federal grant to cover the cost of the USC Wrigley Institute study.

One Utah can replace 10% of US gasoline.
So you would need 10 Utah's for all the gasoline and this does not include diesel and AVgas.
Gives an idea of the scale of the problem.
Alternately, electrify the surface transport and use the kelp to make avgas.

Using half the corn stalks on 100 million acres of corn being grown now
will give us 10% of our road fuel. We can do it but cheap oil wins out for now.

I find the possibilities associated with animal feed to be interesting.  Kelp is becoming more popular as cattle feed, and i wouldn't doubt that rabbits, goats and chickens would do well on it too.  You could farm livestock in the middle of the ocean.