A team led by researchers at Tokyo Institute of Technology (Tokyo Tech) have discovered a new bimetallic electrocatalyst for the oxygen evolution reaction (OER) in electrochemical water splitting: CaFe2O4. This inexpensive, non-toxic, and easy-to-synthesize material outperforms other bimetallic OER electrocatalysts and even surpasses the benchmark set by iridium oxide, paving the way to accessible hydrogen generation. 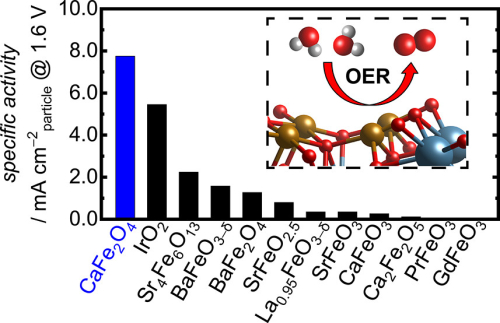 Furthermore, the OER performance of CaFe2O4 is stable during repeated potential cycles without any significant current loss. The study is published in the journal ACS Applied Energy Materials.

Currently, the best-performing water-splitting techniques involve electrocatalysts made from expensive metals, such as platinum, ruthenium, and iridium. The problem lies in that known electrocatalysts made from abundant metals are rather ineffective at the oxygen evolution reaction (OER), the most challenging aspect of the water-splitting process.

Herein, we present an iron (Fe)/calcium (Ca)-based bimetallic oxide, CaFe2O4, which exhibits outstanding OER activity in alkaline media. The OER specific activity of CaFe2O4 is superior to those of previously reported Fe-based bimetallic oxides composed of alkaline-earth or rare-earth metals. Remarkably, it even surpasses that of the benchmark IrO2. … Density functional theory calculations imply that the outstanding OER activity of CaFe2O4 is facilitated by an unconventional mechanism via direct formation of O–O bonds between two oxygen intermediates, which are adsorbed on a multi-iron site on the catalyst surface.

The team tested six kinds of iron-based oxides, including CaFe2O4. They soon found that the OER performance of CaFe2O4 was vastly greater than that of other bimetallic electrocatalysts. To understand the reason behind the exceptional capabilities of this unexplored electrocatalyst, the scientists carried out calculations using density functional theory and discovered an unconventional catalytic mechanism.

It appears that CaFe2O4 offers an energetically favorable pathway for the formation of oxygen bonds, which is a limiting step in the OER. Although more theoretical calculations and experiments will be needed to be sure, the results indicate that the close distance between multiple iron sites plays a key role. 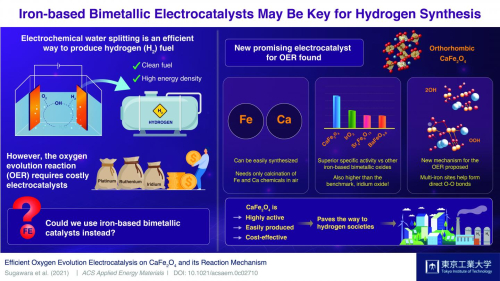 The newly discovered OER electrocatalyst has many advantages, from its easy and cost-effective synthesis to its environmental friendliness, says Dr Sugawara. In addition, the new OER boosting mechanism found in CaFe2O4 could lead to the engineering of other useful catalysts.

Does this mean reduction in the cost of producing hydrogen or increase in electrolysis efficiency (which would also reduce the cost, I suppose).

no expensive metals, such as platinum, ruthenium, and iridium...