In the last year, there has been an explosive need for EV batteries. All car manufacturers seem to be following in the same footsteps as Tesla. In fact, Jaguar plans to become an “all-electric luxury brand” by 2025[1] as mentioned on ABCNews. This shift is also taking place in other motorized segments including trucks and mining machinery. With the COVID pandemic wreaking havoc on the U.S. and global economies with businesses and manufacturers having to close doors and furlough employees, the global trade markets plummeted to an 11-year low of 41.5% in the April report for the Institute for Supply Management’s Manufacturing Index.

As manufacturers set to ramp product back up to produce everything from automobiles, airplanes and construction tools, they will begin to return to normal production cycles. This also means they will face their usual litany of production challenges. This primarily includes dealing with a strained supply chain on critical raw materials, like tungsten, to produce all of those EV-powered automobiles, cranes, trucks and more.

China controls the market for nearly 35 precious minerals and metals that are important to the U.S. for production and manufacturing, and tungsten is among them. According to the USGS in its Mineral Commodity Summaries 2019 report[2], “World tungsten supply was dominated by production in China and exports from China.” 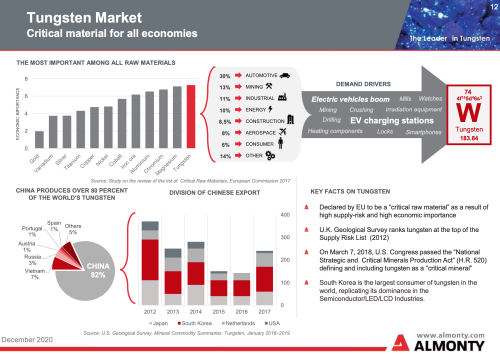 The issue at hand is that China has limited the amount of tungsten exports that can be shipped to the U.S., and this has caused a great deal of concern about the overall supply chain of tungsten. With a growing need of raw materials like tungsten on the horizon and an overdependency from this one source, there is an even greater need to domesticate raw materials.

“China’s government regulated its tungsten industry by limiting the number of mining and export licenses, imposing quotas on concentrate production, and placing constraints on mining and processing,” according to the USGS’ report[2].

The challenge with China being the dominant force for a majority of raw materials is regarding their legal system. Should the U.S. have a boom in demand of a certain material from China, their legal system could effectively stop the supply of that particular material.

Fortunately, new entrants into the market have begun mining projects throughout the world that are mining for tungsten. These efforts are crucially important to increase supply levels and exports back to the U.S., which will benefit the overall global supply chain of tungsten for production and manufacturing.

One project of particular importance is the Korea Tungsten project located in the Sangdong Mine of South Korea, which hosts one of the largest tungsten resources in the world. This mine was the leading global tungsten producer for more than 40 years and it has the potential to produce 50% of the world’s tungsten supply. The project has become a center of focus recently for resource experts, miners, investors, shareholders, and other interested parties around the globe.

Global economies of this relaxed supply chain are eagerly awaiting production of tungsten from this region, especially since it will ease China’s hold on the overall supply of this raw material. What’s more, U.S. manufacturers are keenly watching, since additional supply of tungsten from South Korea would help avoid expensive import tariffs of products shipped from China and enacted by the U.S. government.

The global trade wars have recently heated up, which is costing manufacturers in the process. Currently, the U.S. has imposed tariffs on more than $360 billion worth of Chinese goods, and China has also retaliated by imposing tariffs on more than $110 billion worth of U.S. products. The U.S. imposed three rounds of tariffs on Chinese imports in 2018, with a fourth round completed last September on many items with a 15% duty[3].

Hopefully, the Sangdong Mine is one example of relief U.S. and global manufacturers will see from the mining and production of tungsten to ease the global supply chain of this precious raw material—a material that is sorely needed for many EV-products, both now and in the future.

Lewis Black is CEO of Almonty Industries, a leading global company involved in the mining, processing, and shipping of tungsten concentrate.

Editor’s Note: The principal business of Toronto, Canada-based Almonty Industries Inc. is the mining, processing and shipping of tungsten concentrate from its Los Santos Mine in western Spain and its Panasqueira mine in Portugal as well as the development of its Sangdong tungsten mine in Gangwon Province, South Korea and the development of the Valtreixal tin/tungsten project in north western Spain.

The Sangdong mine, which was historically one of the largest tungsten mines in the world and one of the few long-life, high-grade tungsten deposits outside of China, was acquired in September 2015 through the acquisition of a 100% interest in Woulfe Mining Corp. With Sangdong at full production, Almonty will produce 30% of all tungsten outside of China and 7-10% of global supply.