Haldor Topsoe will invest in a manufacturing facility producing highly efficient solid oxide electrolyzers (SOEC) with a total capacity of 500 megawatt per year with the option to expand to 5 gigawatt per year.

With efficiencies above 90%, Topsoe’s proprietary SOEC electrolyzers offer superior performance in electrolysis of water into hydrogen—e.g., 30% greater output—when compared to standard alkaline or PEM electrolyzers. The superior efficiency stems from the fact that the SOEC works at temperatures above 700 ˚C, which sets it apart from standard electrolysis technologies. The facility is expected to be operational by 2023.

Solid oxide electrolysis cell (SOEC) technology is attractive because of unrivaled conversion efficiencies—a result of favorable thermodynamics and kinetics at higher operating temperatures. SOECs can be used for direct electrochemical conversion of steam (H2O), carbon dioxide (CO2), or both into hydrogen (H2), carbon monoxide (CO), or syngas (H2+CO), respectively. SOECs can be thermally integrated with a range of chemical syntheses, enabling recycling of captured CO2 and H2O into synthetic natural gas or gasoline, methanol, or ammonia, resulting in further efficiency improvements compared with low-temperature electrolysis technologies.

The SOEC is a ceramic cell that uses electricity to split water molecules (H2O) into hydrogen (H2) and oxygen (O2). It basically consists of three parts: an anode, a cathode and an electrolyte. At the cathode, water molecules are split by a reduction reaction into hydrogen and oxide ions, the oxide ions are transported through the electrolyte to the anode where they are oxidized into oxygen. 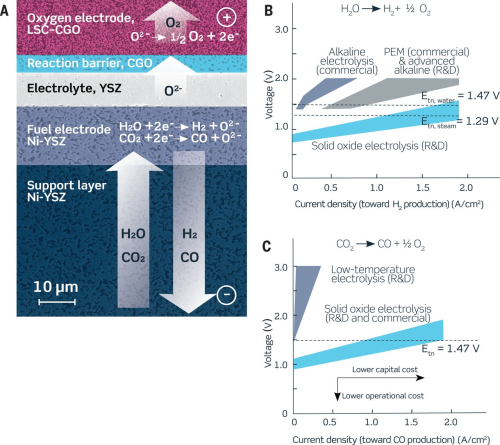 Structure, operating principle, and performance of an SOEC. (A) Electron microscopy image of the active layers of an SOEC (color overlaid) and the electrochemical reactions occurring in the cell during H2O and CO2 electrolysis. Typical performance ranges for competing electrolysis technologies for (B) H2O splitting and (C) CO2 splitting. Etn, thermoneutral potential. Hauch et al.

The SOEC is mainly built of abundant and low-cost ceramic materials in a metal housing. No rare metals or conflict minerals are used.

With the new facility, Topsoe will accommodate the rapidly increasing demand for competitive electrolysis technology, predominantly for green hydrogen plants based on renewable electricity.

Development of the automated manufacturing facility that will be the largest of its kind is ongoing. Construction will commence in 2022 in order for the facility to be operational by 2023.

Topsoe is currently a global leader in hydrogen technology, catalysts, and services that enable efficient production of hydrogen. Offerings include technologies for traditional natural-gas-based hydrogen production with the option of carbon capture, also known as blue hydrogen, as well as green hydrogen with the SOEC electrolyzer technology.

With the SOEC technology and decades of experience as a world-leading technology provider within ammonia, methanol, gasoline, jet-fuel, diesel, and hydrogen, Topsoe is one of the few companies that can deliver insights and technology along the entire value chain for next-generation fuels and chemicals.

Our unique end-to-end offering within green hydrogen production by electrolysis and the associated downstream production of ammonia, methanol, and e-fuels offers customers high-value products, safe transportation, and energy-efficient storage, and we are already talking with potential customers who are interested in being first movers in this space.

500MW is proper industrial scale, and 90% efficiency means that even after re-conversion to electricity at, say, 50% efficiency, and we have hit more than that already with far more possible, overall trip efficiency is 45%.

That is considerably more than the fossil fuel cycles which we have run the world economy on for many decades, but if the hydrogen is from renewables, without the nasties, either GHG or particulates et al.

Battery only advocates love to tout the efficiency of the system, but the notion of using batteries for long term storage is ludicrous, with nothing in the figures working, either costs or indeed the basic chemistries, with self drain from batteries at around 1% per day.

How the heck do you do seasonal storage that way?

Batteries are fine for frequency regulation, and load shifting for an hour or so, but not for serious mass storage, so they are not comparing like for like.

CO2, water, renewable electricity to syngas to fuel.
One reason we sequester carbon, reuse to reduce.

This integrates even better with advanced nuclear.  Nuclear can supply the always-on power to keep the cells hot even when they're not being actively used, and the bias voltage to keep the oxidation state of the electrodes from being reversed and damaging them.