Home About Contact RSS GCC Twitter Newsletter
High-blend renewable fuels could cut extra 46m tonnes GHG emissions from truck operations in UK by 2030
What types of electric vehicles were purchased in the U.S. in 2020?

One of the major causes for the drop in capacity over time in Li-ion batteries is the degradation of the widely used graphite anodes. One of the major challenges for graphite anodes is the exfoliation of the graphite framework on deep cycling at a fast current rate. Graphite thus requires a binder to prevent it from falling apart with use. The most widely adopted binder today, poly(vinylidene fluoride) (PVDF), has drawbacks that render it far from an ideal material.

PVDF is characterized by a nonconducting nature, slow dissolution in the electrolyte, and poor adherence to the current collector—thus limiting its utility as a robust binder for lithium-ion batteries designed for a long cycle life.

In search of an alternative, a team of researchers from Japan Advanced Institute of Science and Technology (JAIST) is investigating a new type of binder made from a bis-imino-acenaphthenequinone-paraphenylene (BP) copolymer. 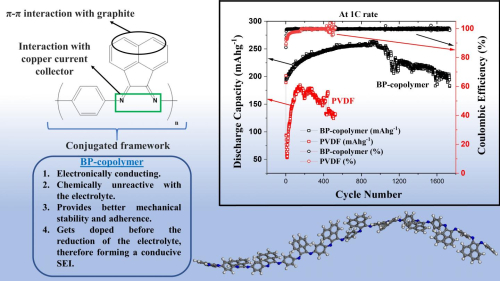 The BP copolymer offers several advantages that put it ahead of the conventional PVDF binder in terms of stability and durability. Credit: Noriyoshi Matsumi from JAIST

In a paper published in the journal ACS Applied Energy Materials, the team led by Professor Noriyoshi Matsumi reports that BP binder-based anodic half-cells outperformed their PVDF-based counterparts, showing an excellent performance with a reversible capacity of 260 mAh g–1, cyclability up to 1735 long cycles at 1 C rate, and 95% capacity retention.

The researchers attributed the superior performance of the BP binder to its ability to provide mechanical robustness to a number of factors, including:

The BP copolymer-based half-cells also showed a very high and stable coulombic efficiency, a measure that compares the amount of charge flowing in and out of the cell in a given cycle; this is also indicative of the long-term durability of the battery.

Images of the binders taken with a scanning electron microscope before and after cycling revealed that only tiny cracks formed on the BP copolymer, whereas large cracks had already formed on PVDF in less than a third of the total number of cycles.

This study was supported by the JST-Mirai Program (grant umber JP18077239).