Hystar, a spin-out from SINTEF that is developing a novel PEM electrolysis technology, has raised more than NOK 50 million (US$5.9 million) to support further development and commercialization. Hystar’s electrolyzer produces hydrogen using less energy than existing technologies and enables a substantial increase in hydrogen production output.

AP Ventures, a significant investor in breakthrough hydrogen technologies, led the fundraise, alongside SINTEF Ventures, the investment fund of the SINTEF research institute, and Firda, a pioneering early-stage investor in Norway.

We believe that green hydrogen production has a long and attractive future globally, and we consider the ability to produce it at the efficiencies achieved by Hystar as a significant breakthrough in the electrolysis space. Hystar’s technology will reinforce hydrogens pivotal role in the transition to a decarbonized future.

Leveraging SINTEF’s work in its HieffPEM project, the Hystar technology features the use of a thin membrane. Hystar co-founders Alejandro Oyarce Barnett and Magnus Thomassen, when they were at SINTEF, described the basis of the technology in a paper presented at the 2nd International Conference on Electrolysis in June 2019:

The HieffPEM concept consists of reducing all ohmic losses of the electrolyser stack, including membrane ionic resistance and electrical resistances of the porous transport layers (PTLs) and bipolar plates (BPPs). In order to achieve a low membrane resistance, a thin PEM membrane is employed. Normally, employing thin PEM membranes in electrolysers may result in unsafe electrolyser operation, as a thin membrane may have hydrogen permeation rates from cathode to anode close to the explosion limit. In contrast to state‐of‐the‐art PEM electrolysers, operating with DI water at the anode, the HieffPEM electrolyser operates with humidified air and therefore diluting any hydrogen that may have crossed over to a safe operating level.

In an interview with TU Energy, Thomassen said that while conventional PEM electrolyzers use a membrane up to 0.2mm in thickness, Hystar has developed technology that requires only 10% of that. 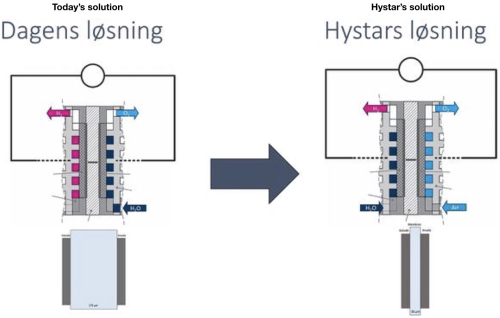 Hystar’s technology makes it possible to have a very much thinner membrane. Credit: Hystar

To preclude the potentially dangerous situation of hydrogen build-up on the anode side due to the thinness of the membrane, Hystar blows air in on the anode side, using the nitrogen-rich air to dilute the H2 concentration to a level that is safe.