In a project co-funded by Ford Motor Company and the ExOne Company, a team of engineers, material scientists, and manufacturing experts has developed a patent-pending process for rapid and reliable binder jet 3D printing and sintering of aluminum 6061 that delivers properties comparable to die casting. Aluminum 6061 is one of the most commonly used aluminum alloys in the world. 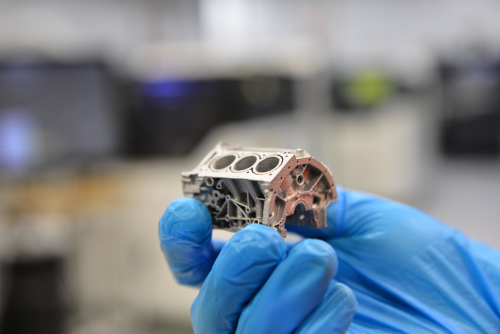 This aluminum engine block model, 3D printed in 6061, demonstrates the high resolution and geometric control that can beproduced in a new patent-pending binder jet 3D printing and sintering process developed by Ford and ExOne.

Delivering a commercially viable achievement in this area has evaded researchers for more than a decade. Collaborative and individual patents are expected to be filed by Ford and ExOne as a result of this ongoing project.

Some aluminum alloys can be 3D printed today using lasers, but the process is much slower than the one developed by Ford and ExOne. The new process is expected to increase Ford’s efficiency by allowing the company affordably to produce complex parts uniquely designed for additive manufacturing, which enables size and weight reductions, part consolidation, and performance improvements.

This is a breakthrough in making 3D printed and sintered parts for the auto industry. While the 3D-printing process is very different than stamping body panels, we understand the behavior of aluminum better today, as well as its value in light-weighting vehicles. High-speed aluminum 3D printing paves the way for other opportunities that we’re just now starting to take a look at because of the ability to do complex parts with aluminum that previously weren’t possible. It’s really opening doors for other opportunities.

The new innovation came about through the process of binder jetting, widely regarded as the fastest method of metal 3D printing for high-volume output. It uses a digital file to quickly inkjet a binder into a bed of powder particles such as metal, sand, or ceramic to create a solid part, one thin layer at a time.

When printing metals, the final bound metal part must be sintered in a furnace to fuse the particles together into a solid object. The heating process reinforces the strength and integrity of the metal, and while the process for sintering stainless steel is well understood, achieving high densities greater than 99% is an industry breakthrough for aluminum.

The Ford-ExOne joint development project was first initiated in 2019. Ford has led the final material and repeatability testing to verify its accuracy. The cross-functional Ford-ExOne team is actively working on designs to use the new material and process.

The relationship between Ford and ExOne goes back to the early 2000s, when Ford purchased several of ExOne’s first industrial sand 3D printers in the United States to create sand molds and cores for metal casting. ExOne 3D printers are among a wide range of technologies featured in Ford’s Advanced Manufacturing Center in Redford, Mich., with additional ExOne printers in Ford’s UK facilities.

ExOne has now qualified 23 metal, ceramic and sand materials for use on its binder jetting printers. With the addition of aluminum, that now includes 12 single-alloy metals.