In March 2020, in a tender launched by German operator Regionalverkehr Köln GmbH (RVK), Solaris Bus & Coach was selected to supply 15 Solaris Urbino 12 hydrogen buses. The first of the hydrogen vehicles has been delivered and is being tested in the RVK branch in Wermelskirchen in the Rheinisch-Bergisches Kreis district. The remaining 14 hydrogen buses will make their way to Germany by the end of the year. 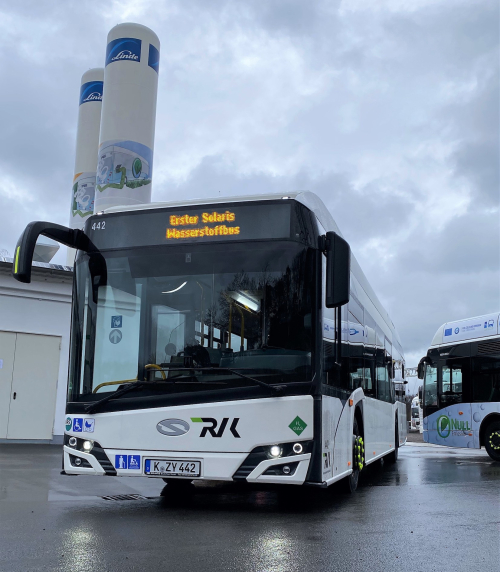 Currently, RVK’s drivers are undergoing training in refueling processes, the specifics of the hydrogen drive, and the technology used in the hydrogen bus. The Solaris Urbino 12 hydrogen is the first hydrogen-powered vehicle delivered by the manufacturer to this region.

In the end, all of the ordered buses will be deployed to three locations where RVK operates. Five of them will be put into service in the Rheinisch-Bergisches Kreis district, another five will go to the Rhein-Sieg district on the left bank of the Rhine, and the remaining five will ply their trade in the city of Hürth.

The hydrogen-powered Solaris buses have been purchased as part of an EU project called JIVE 2, with the support of “The Fuel Cells and Hydrogen Joint Undertaking”, the Federal Ministry of Transport and Digital Infrastructure (BMVI), and thanks to the NIP2 program (National Innovation Program Hydrogen and Fuel Cell Technology) and the support of the Ministry of Transport of North Rhine-Westphalia.

The first of the eco-friendly Solaris Urbino 12 hydrogen vehicles delivered to Germany uses a set of 70 kW fuel cells. The bus is capable of covering up to 350 km on a single refill, which is of particular importance for RVK’s network.

Apart from densely populated city districts, the vehicles will also service vast rural areas. The hydrogen bus has been equipped with a Solaris High Power traction battery that boosts the fuel cell in moments of increased demand for electric power. The battery is recharged using energy derived from hydrogen and energy recovered during braking.

The bus offers more than 30 seats on board and features a door layout of 2-2-0. The MobilEye Shield+ system installed in the vehicle helps drivers detect possible collision risks. Equipped with cameras placed outside of the vehicle, the device will alert the driver to other road users near or moving closer to the bus, which is particularly important when turning.

German operator WSW Mobil GmbH from Wuppertal has also placed an order for 10 vehicles of the same type. Solaris will also deliver 12 hydrogen buses to Italian operator SASA Bolzano and 20 such units to Dutch operator Connexxion, providing transport services for the province of South Holland, by the end of 2021.