Canada has released a list of 31 minerals considered critical for the sustainable economic success of Canada and its allies—minerals that can be produced in Canada, are essential to domestic industry and security and have the potential to support secure and resilient supply chains to meet global demand.

Global demand for critical minerals is increasing to support the transition to a low emissions global economy. The government of Canada says that the country can leverage its mining and processing expertise and world leading environmental, social and governance credentials, and become the global supplier of choice for clean and advanced technologies.

The critical minerals list is a result of collaboration with other federal departments, exploration, mining and manufacturing industries, and extensive consultation with the provinces and territories over a period of five months.

The list prioritizes building an industrial base for the low-carbon, digitized economy, and provides greater certainty and predictability to industry, trading partners and investors on what Canada has to offer. 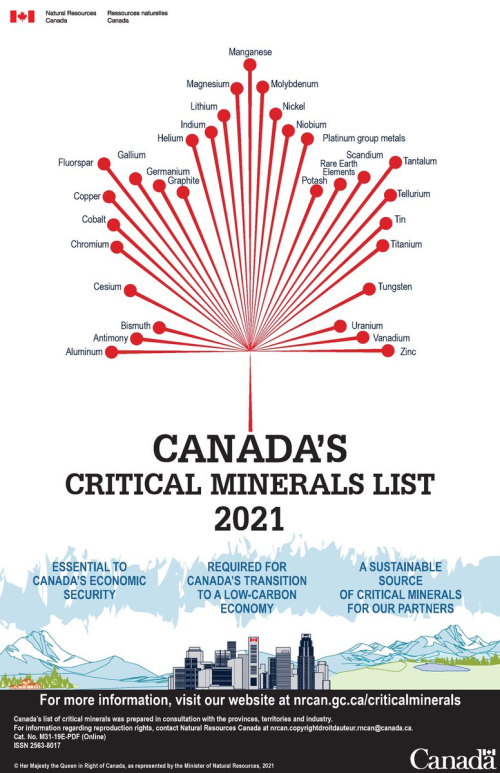 For example, Canada is the only Western nation that has an abundance of cobalt, graphite, lithium and nickel, essential to creating the batteries and electric vehicles of the future.

There are other areas where Canada’s minerals can play an important role in global markets, through its ‘mines to mobility’ approach. Canada is the world’s second-largest producer of niobium, an important metal for the aerospace industry, and the fourth-largest producer of indium, a key input in semi-conductors, as well as many of the materials needed for advanced vehicle manufacturing.

In the view of market analysis firm Roskill, Canada is already a global mining powerhouse, given its significant mineral resources and numerous world-class production assets. Mining and processing activity in Canada already encompasses the supply chains for numerous critical minerals. Canada has the potential to increase both the range and quantity of the critical minerals it currently produces.

Further developing its critical mineral offer could bring numerous benefits to Canada, ROskill said. There would be clear economic opportunities with regard to trade: as many of Canada’s key trade partners are not endowed with such a range of mineral resources and production facilities, Canada is well positioned to benefit from increasing demand for critical minerals by highlighting its reputation as a reliable partner.

Higher production and trade would of course be positive for Canada’s extractive sector, its mine and refined producers, but would also have considerable downstream and cross-sectoral benefits. Furthermore, investment in, and development of, critical minerals supply chains in Canada would have additional national security and geopolitical benefits.