Geologists and materials scientists at Friedrich-Alexander Universität Erlangen-Nürnberg (FAU) have discovered a new way of finding new and previously unknown deposits of rare earth metals, worldwide. They have published the findings of their study in the journal Geology. 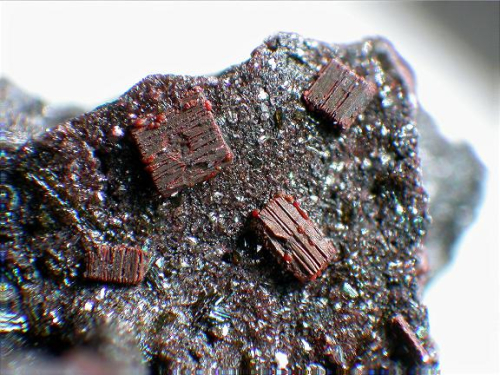 Olivine is one of the earliest phases to crystallize from ultramafic and mafic magmas. It is therefore common in mafic igneous rocks, but olivine also occurs in A-type granites (anorogenic), syenites, and rhyolites. Hence, the composition of olivine is crucial for improving our understanding of magmatic processes. Recent studies indicate that the incorporation of rare earth elements (REEs) is related to structural bonding in the olivine crystal lattice. Despite the usually low REE contents of olivine, the abundance of olivine in the crystallizing assemblages of mafic magmas may cause significant REE fractionation. However, REE data are rare for olivine, and therefore the processes responsible for REE incorporation in olivine are poorly understood. While some data for Mg-rich olivine exist, REE data for Fe-rich olivine are almost absent.

Fayalite (Fe2SiO4) with extraordinary high heavy REE (HREE) contents in ultramafic cumulates of the Vergenoeg F-Fe-REE deposit (South Africa) provides the unique opportunity to study REE systematics in olivine. Although currently mined for fluorite, Vergenoeg is also a significant REE resource. However, the source and host minerals of the REEs have hitherto been unresolved. We document the high HREE contents in cumulate fayalite by laser ablation–inductively coupled plasma–mass spectrometry (LA-ICP-MS) and atom probe tomography (APT), discuss mechanisms for the HREE incorporation into fayalite, and identify fayalite as host for the HREE mineralization in the Vergenoeg deposit.

Rare earth metals are irreplaceable for manufacturing advanced high-tech industrial products due to their luminescent and catalytic properties. They are used to make permanent magnets that are a vital part of modern electronics in televisions, smartphones, notebooks, jet engines, and rocket guidance systems as well as in solar and wind power plants, electric motors and in medical engineering.

Contrary to what their name might suggest, sources of rare earth elements or rare earth metals are distributed fairly equally all over the world. However, there are only very few sources that are economically viable.

They inspected rock samples from the Vergenoeg fluorite mine in South Africa and discovered that fayalite crystals in the sediment of granite-like magma can contain large amounts of heavy rare earth elements. The mineral, which is reddish brown to black in color, is mainly mined for use as a gemstone and is also used for sand blasting. Fayalite can be found worldwide in igneous rock and abyssal rocks.

Since heavy rare earth elements are becoming increasingly scarce on the world market, the discovery of fayalite as a new potential source for locating new deposits of rare earths is extremely important for the economy.