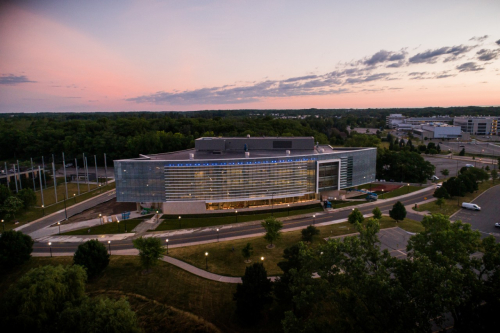 As Ford continues the most profound transformation in our history with electrification, connectivity and automation, advancing our collaboration with the University of Michigan will help us accelerate superior experiences for our customers while modernizing our business. We also will broaden our learning through daily exposure to many robotics activities, such as considering how our Digit robots not only technically can master delivering packages from autonomous vehicles but also become valued parts of our neighborhoods.

The U-M Robotics Institute aims to advance human-centered robots—machines and systems that interact with people and move through our spaces, extending the human body and the process of human cognition. New labs enabling this include:

For Ford, the facility is key to the company’s transformed and modernized research and product development processes aimed at disrupting the transportation landscape. Key research will focus on:

Autonomous vehicles have the opportunity to change the future of transportation and the way we move. As this new technology rolls out, having our Ford team working on campus collaborating with the academic world will help us shorten the time it takes to move research projects to automotive engineering, unlocking the potential of autonomous vehicles.

Robots and robotics for any environment. In addition to the M-Air drone cage and Mcity Test Facility, the college is also home to the Aaron Friedman Marine Hydrodynamics Lab, which houses a 360-foot-long indoor body of water for testing robotic and conventional watercraft. Its Space Physics Research Lab develops and tests robotic spacecraft and instruments for deployment across the solar system. Inside the new building, researchers working on machines for each of those environments, and others, can learn from and inspire each other.

The Ford Robotics Building anchors the west end of the Michigan Avenue mobility testbed that begins in Detroit’s Corktown neighborhood and runs through Dearborn to Ann Arbor, where Ford and U-M are teaming with other innovators to experiment with potential mobility solutions for the future.

In collaboration with the state of Michigan and others, Ford and U-M are involved in developing this first-of-its-kind corridor for connected and autonomous vehicles that will continue the state’s mission to lead the development of smart infrastructure and future mobility. A key goal of the initiative is to close long-standing gaps in access to public transit and transportation across southeast Michigan.