The world’s largest plant for storing green hydrogen in liquid organic hydrogen carriers (LOHC) on an industrial scale is being built at CHEMPARK Dormagen. The state of North Rhine-Westphalia is supporting the project with funding of €9 million from the progres.nrw program. The Krefeld-based subsidiary of Hydrogenious LOHC Technologies, LOHC Industrial Solutions NRW GmbH, will take charge of project management and plant operation. 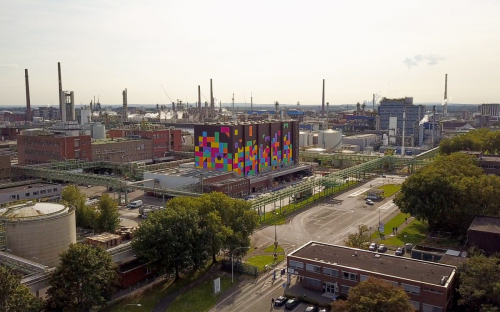 With its proprietary LOHC technology, the Erlangen-based parent company can contribute the key element and the corresponding scaled plant system. Its investor Covestro Deutschland AG will provide the site area and, in the future, the green hydrogen. The scientific partner is the Jülich Research Center with its Institute for Energy and Climate Research; €2 million of the funding for accompanying scientific studies will go there.

Together with the Dutch co-investor Royal Vopak, a possible expansion of the project and potential establishment of a green hydrogen supply chain between the plant in Dormagen and Rotterdam is also being planned. There, the green hydrogen would be released from the LOHC and used primarily in the mobility and industrial sectors.

As part of our project, we are making the Dormagen CHEMPARK the home of the world’s largest pilot plant for storing green hydrogen in LOHC – we will use our proprietary technology based on the LOHC carrier medium Benzyltoluene for this purpose. With the planned plant capacity, about 1,800 tonnes of hydrogen per year can be stored in LOHC. This is not only a huge step forward in bringing our LOHC technology to industrial scale. At the same time, one of the currently largest supply chains for green hydrogen is being created.

Prof. Dr. Peter Wasserscheid, Director at the Institute for Energy and Climate Research at Forschungszentrum Jülich and Director of the Helmholtz Institute Erlangen-Nuremberg for Renewable Energies (HI ERN) has been a major co-developer of LOHC technology.

The planned plant in Dormagen represents a significant upscaling of hydrogen storage in the form of the LOHC carrier Benzyltoluene and has about twenty times the single-storage capacity of previous plant sizes. In our accompanying research, we’ll concentrate on three aspects in the project: The catalyst behavior in real operation, possible influences of the LOHC or hydrogen quality on the hydrogenation process and on the further development of industrially usable quality assurance procedures for our LOHC system.

Hydrogenious’ LOHC technology bonds hydrogen molecules to the organic carrier (dibenzyltoluene) via an exothermic catalytic process. The uptake is 57 kg of H2 per cubic meter LOHC. The LOHC remains is a liquid state across a broad temperature range (-39 to +390 ˚C) and ambient pressure. It is thus transportable using convention fuel infrastructure.

Dehydrogenation—the release of the H2 from the carrier—is an endothermic process with about 11 kWhth/kgH2 required at 300 ˚C.

One focus of the project is to integrate the heat energy released during the LOHC hydrogenation process into the steam network and thus into the site’s energy supply. The overall efficiency of the LOHC cycle can thus be significantly increased. Commissioning of the plant is scheduled for 2023.

Covestro Deutschland AG—a shareholder in Hydrogenious LOHC Technologies since mid-2019—plans to supply the green hydrogen for this purpose. This will be produced at the site in future as an industrial by-product.

In addition to the established cooperation with Covestro Deutschland AG, Royal Vopak, one of the world’s leading companies in the provision of infrastructure for the chemical and energy industries and as well an investor in Hydrogenious LOHC Technologies, has also announced its support.

how well do you think this new tech will be adopted ?