Researchers develop bi-metallic catalyst for thermocatalytic decomposition of methane: H2 with low or no CO2

A paper on their work is published in the journal Applied Catalysis A: General.

The TCD process uses a novel bimetallic catalyst to produce hydrogen. Solid carbon that accumulates on the catalyst is washed and separated for commercial use, while the metallic precursors are re-synthesized and recycled back into the reactor. The closed-loop cycle allows for continuous catalyst replacement while emitting zero carbon dioxide emissions. (GIF by Mike Perkins | Pacific Northwest National Laboratory)

For decades, PNNL scientists and engineers have led research using catalysts to reduce CO2 emissions from industrial processes and transportation. Former PNNL research engineer, John Hu, now an endowed chair professor of the Statler College of Engineering and Mineral Resources at WVU, was one of those engineers.

Hu experimented with catalysts and processes that could cleanly convert methane into both hydrogen and carbon using catalytic pyrolysis. Continuing his research at WVU, Hu discovered a nickel-based catalyst formulation that stayed anchored to its support structure while growing carbon nanocrystals. This anchoring could enable the recovery of pure carbon nanotubes (CNT) and nanofibers, as well as catalyst regeneration.

Hu’s results, published in 2017 in Catalysis Science and Technology, caught the attention of PNNL and industry, and formed the basis for the national laboratory-university-industry project through funding from the DOE Office of Energy Efficiency and Renewable Energy’s H2@Scale initiative for clean hydrogen use across the economy.

The team’s first step was to perform advanced catalyst tests and thoroughly characterize the resulting carbon products. Rob Dagle, a chemical engineer who had worked with Hu on past research projects, led the testing and analysis at PNNL, home of the Institute of Integrated Catalysis. The team also took advantage of scientific expertise and capabilities at the Environmental Molecular Sciences Laboratory (EMSL), a DOE scientific user facility located on the PNNL campus. 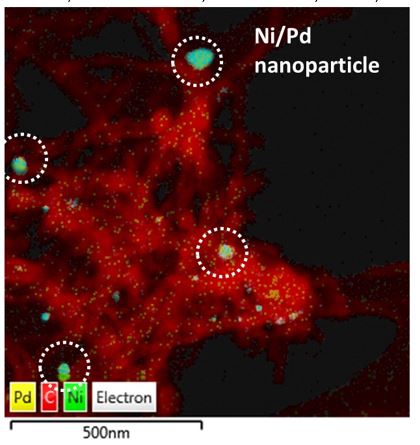 The researchers found that controlling the growth mechanism of CNTs was very difficult. Through systematic testing of different-sized nickel particles paired with other metals, the team found that the addition of a second metal altered the mechanism of carbon growth and further improved catalyst stability.

The researchers then developed and demonstrated a thermocatalytic decomposition (TCD) method to separate and resynthesize the catalyst for a closed loop process.

The TCD process starts by flowing methane gas through the patent-pending bimetallic catalyst inside a reactor vessel operating at approximately 600 ˚C. The chemical reaction produces hydrogen as solid carbon accumulates on the catalyst. After this, an acid wash separates the carbon products from the metallic catalyst precursors. Next, the precursors are re-synthesized using some of the carbon product as the catalyst support. As the final step, the recycled catalyst re-enters the reactor, completing the loop for continuous catalyst replacement. The high-value carbon products gleaned from the wash process remain separate for industrial use. 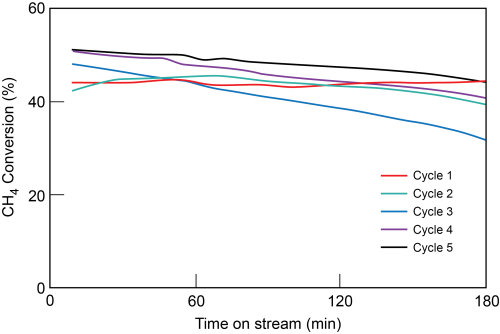 Meanwhile, C4-MCP evaluated market opportunities for the crystalline carbon co-products, which have attractive properties, such as electrical conductivity, high tensile strength, and high thermal and chemical stability. The company projected the global market for the carbon nanotubes to increase from approximately $3.5 billion in 2016 to $8.7 billion by 2022, with robust growth rates of more than 17% annually.

Conventional steam methane reforming typically emits around 11g CO2 per gram of hydrogen. For methane pyrolysis, PNNL projects a decrease in carbon dioxide emissions by 85% or more, depending on how the process is heated—for example, burning some of the produced hydrogen will result in zero emissions.

PNNL and WVU would also evaluate adjusting operating temperatures for higher yields per cycle, as well as ways to increase catalyst stability for more cycles before replacement. C4-MCP would look for new market opportunities made possible by the unique crystalline properties of the carbon co-products.

Wow, turning a dangerously abundant, powerful greenhouse gas into 2 useful high value products, like killing 3 or 4 birds with one stone!